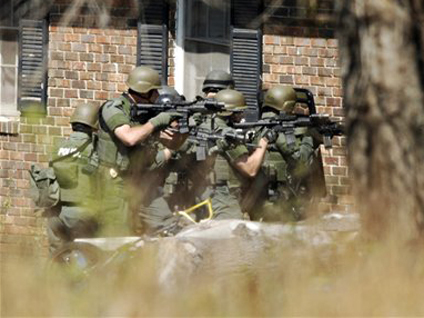 ATHENS, Ga. - The man charged in the shooting death of a Georgia police officer released four of the eight hostages who authorities said he was holding at an Athens apartment Friday evening, and negotiators were working toward a peaceful surrender.

"l like to think it's getting closer if we have hostages being released," Holeman said when asked whether the crisis could soon be defused. "Let's hope so."

Georgia Bureau of Investigation Director Vernon Keenan made a public promise to the suspect that he wouldn't be harmed if he released the hostages and gave himself up.

"I know that you are concerned with your safety and I want to pledge to you that if you will come out unarmed, you will not be harmed," Keenan, appearing before TV news cameras, told Hood. "I know that you have released four persons unarmed and you have established a good rapport with us."

Police had been searching for Hood since Tuesday, when Athens Clarke-County policeman Elmer "Buddy" Christian was shot and killed while police say he attempted to apprehend Hood. Another officer, Tony Howard, was shot in the face and upper body, and is recovering from his wounds.

A law enforcement official who requested anonymity due to the sensitive nature of the case told The Associated Press earlier Friday that Hood contacted authorities and requested to speak with his mother and his attorney. The official said Hood was "agitated" and wary of negotiating with police.

The four-day manhunt led authorities to a range of locations around Athens-Clarke County as they received a flurry of tips about where he might be hiding. Officers descended on an area in east Athens, surrounding an apartment complex and barricading nearby roads.

The search began after authorities stopped Howard while he was in an SUV in West Athens around 1 p.m. Tuesday, seeking to question him in connection with a carjacking and kidnapping.

The vehicle's driver was arrested, but police say Hood got out of the vehicle and shot and wounded Howard, striking him in the face and the upper body. He then fatally shot Christian while he was still sitting in his patrol car, authorities said.

Athens-Clarke County Police Chief Joseph Lumpkin called the shooting a police ambush. Lumpkin said this week he hoped a $50,000 reward would inspire someone to come forward, calling Hood a "career criminal" who has associates in the city's murky criminal world.

Police are expecting thousands of people to attend Sunday's funeral for Christian, who was an 8-year veteran of the Athens police department. Christian, 34, was married with two young children.

Friday evening, a crowd of residents and onlookers gathered at a nearby church and gas station to monitor the hostage situation. Several of Hood's relatives waited for updates and prayed it would end without bloodshed.

Jennifer Hood, the suspect's sister, said her brother called police Friday and told them he wanted to turn himself in.