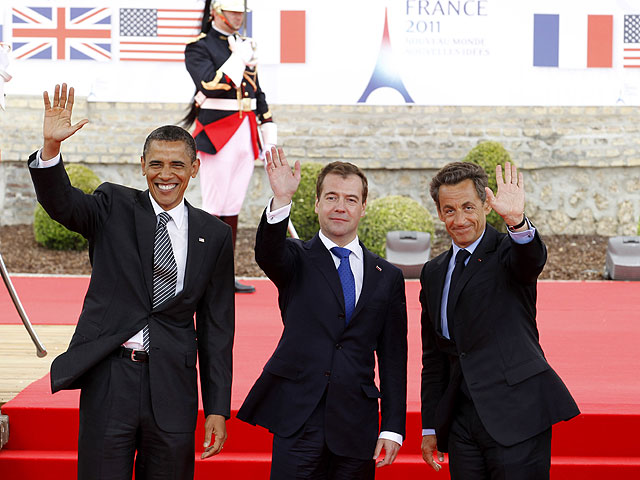 (CBS/ What's Trending) - In 2011, the Internet has become more than a platform for collective response. Social media is an integral tool for crisis managers and citizens to help one another during disasters, hailed by the administrator of FEMA as an innovation equal in importance to the radio in the 20th century. Whether social media is used for digital diplomacy or citizensourcing smarter government or to discuss the future of the Middle East, the Internet matters more than ever.

This past week, the official communiqué released by the summit of the Gang of Eight industrial nations, or G8, hailed the importance of the Internet to the world's citizens in the 21st century ahead:

"The Internet has become the public arena for our time, a lever of economic development and an instrument for political liberty and emancipation. Freedom of opinion, expression, information, assembly and association must be safeguarded on the Internet as elsewhere. Arbitrary or indiscriminate censorship or restrictions on access to the Internet are inconsistent with States' international obligations and are clearly unacceptable. Furthermore, they impede economic and social growth."

The communique also recognized the role of the inaugural eG8 Forum held in Paris, prior to the summit, in exploring these issues. The eG8 showed that online innovation and freedom of expression still need strong defenders. Coming on a week when Iran vowed to unplug the Internet,, thereby disconnecting Iranian citizens from this platform, the G8 leaders holding up those principles was both timely and notable. When Facebook is publicly denounced by the leader of Libya, the world has changed. As Syria cracks down on social media, whether we can hear the global voices of one another is a serious question, as is whether people living under autocratic governments can access the Internet safely or at all. The global network as many of the world's citizens know it today, however, was never a sure outcome, nor a permanent one. Some two decades ago, people were logging onto services like Prodigy or Compuserve, not the World Wide Web that Tim Berners-Lee enabled from his computer in Switzerland. The communiqué identified the principles that have led to the continued growth of the Internet as we know it: "The openness, transparency and freedom of the Internet have been key to its development and success. These principles, together with those of non-discrimination and fair competition, must continue to be an essential force behind its development." Today, defenders of innovation and net neutrality at the eG8 meant speaking openly about the risks to the Internet as we know it. To what extent do politicians and citizens need to understand the relationship of politics and an open Internet? "The primary reason we need to support the Net is because it is a foundational part of how we have our democracy," said Yochai Benkler, co-director of the Berkman Center for Internet and Society. Benkler was one of several prominent American academics who spoke up for civil society during the eG8 Summit and in a press conference held at the event.

"The critical change produced by the digital network environment is the radical decentralization of the capacity to speak, to create, to innovate, to see together, to socialize, the radical distribution of the poor means of production, computations, communications, storage, sensing, capture human sociality that which gets us together inside the experience, being there on the ground. "That is true for the first time since the industrial revolution, that people can actually, with the things they own, capture the world and do something that is at the very core of the most advanced economies. Preserving that framework, preserving a framework that is open, free-flowing, flexible, adaptive to change and inviting so that one person's sacrifice in Sidi Bouzid can then be translated throughout the Arab world into a moment of mobilization. That's new, that's what is critical."

What's at stake today has been what's at stake for over 15 years, said Benkler: the possibility that a coalition of forces who are afraid of the internet will shut it down."There is still a very powerful counter argument, one that says both for innovation and for freedom, we need an open Net," he said. We spoke further in this interview: "You don't need to be 'from the Internet' to believe in liberty or free speech," said Esther Dyson, speaking in an interview at the eG8. You also don't need to be a policy wonk or a geek to see how building tools that tap into the power of the Internet's distributed platform are an integral part of a transparency movement that has gone global. Startups and technology companies are "providing tools to make the data meaningful," said Dyson. "They're providing tools for people to share the information. They're providing the communication tools, again, that allow from everything from Wikileaks to people communicating with reporters. Tools like your phone, connected to the Internet, so that you can record interviews not just with me but with all of the other people you talk to, upload them, people can share them, people can comment on them. That's all technology." The G8 acknowledged technology can be used to improve government, whether for everyday transactions of enabling democratic participation. "For governments, the Internet is a tool for a more efficient administration, for the provision of services to the public and businesses, and for enhancing their relations with citizens and ensuring respect for and promotion of human rights," wrote its drafters. One existential challenge for the Internet of 2011 is that the technology platforms that helped to catalyze the Arab Spring when combined with brave citizens acting as sensors with cellphones are owned by private companies. As governments everywhere struggle to understand and respond to the rapidly emerging role of new media on the world, the young leaders of Twitter, Facebook, YouTube and other platforms will have their courage, convictions and ethics tested again and again to change the terms of service. If an open Internet is the basis for democracy flourishing around the world, billions of people will be counting upon them to be up to the challenge.