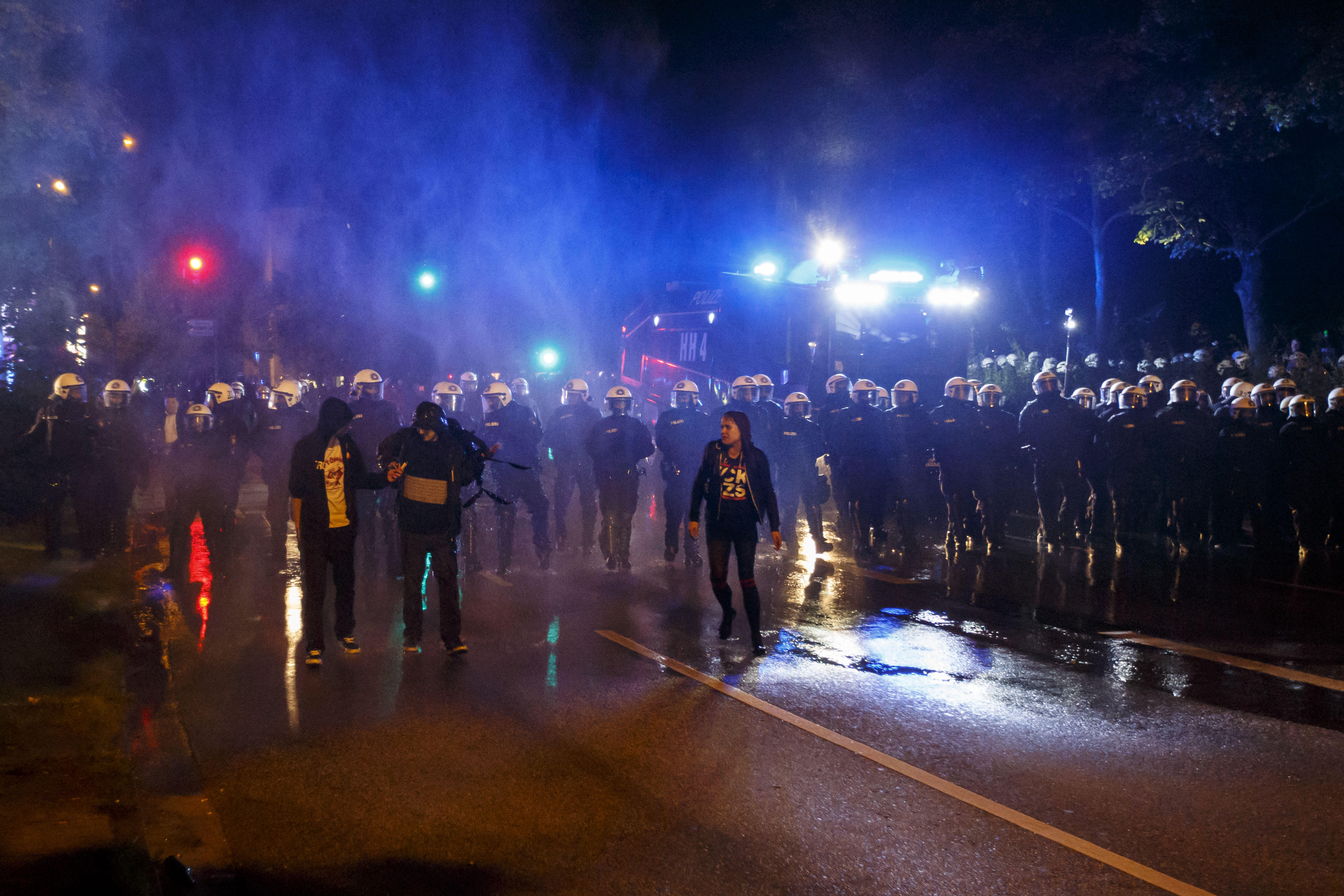 BERLIN -- President Donald Trump was met with thousands of protesters when he arrived at meetings in Brussels in May. But with Russian President Vladimir Putin and Turkish President Recep Tayyip Erdogan joining him at the Group of 20 meetings in Germany this week, he likely won't even be at the top of the list for demonstrators.

Add India's Prime Minister Narendra Modi, Chinese President Xi Jinping and other leaders whose controversial policies have sparked unrest, mix in the cauldron that is Hamburg -- the summit venue is less than a mile from the country's most notorious hotbed of left-wing protest -- and the brew could prove explosive.

"G-20: Welcome to Hell" is the slogan anti-globalization activists registered for their protests on July 6, when Mr. Trump and other leaders arrive for the July 7-8 summit in the northern port city.

"We are calling on the world to make Hamburg a focal point of the resistance against the old and new capitalist authorities," said the organizers, who have ties to the Rote Flora squat, a center for radical leftists where police have clashed frequently with protesters. The site is a short walk from where the leaders will be meeting.

Already in the weeks ahead of the summit, in incidents believed linked to the meeting, police cars have been burned, train lines have been sabotaged and authorities in Hamburg and the nearby city of Rostock have confiscated improvised weapons like fire-extinguishers filled with flammable liquid, material to build gasoline bombs, baseball bats, slingshots and other items in several raids.

One man was reportedly arrested in connection with those raids.

"We have to assume that this is only a tiny percentage of what is still in basements and garages in and around Hamburg," Hamburg police criminal director Jan Hieber told reporters this week.

In a preview of things to come, police clashed Tuesday night in Hamburg with hundreds of protesters, using pepper spray and water cannons to eventually bring the crowd under control.

The "Welcome to Hell" demonstration is just one of dozens of protests that have been registered under a smorgasbord of themes - including a far-right pro-Trump rally - with more than 100,000 demonstrators from across Europe and beyond taking part.

"This isn't about sit-ins," Meyer said.

That's not to say all protesters are violent - most aren't and see the gathering of as an opportunity to highlight their messages with the world watching, and with the hope the leaders gathering inside Hamburg's congress will listen.

Greenpeace, for example, sees the G-20 as an opportunity for leaders to send a strong signal about their determination to fight climate change - despite the U.S. decision to pull out of the Paris agreement.

"We're looking for the G-20, and if that's not possible, then the G-19, to go forward with implementing the Paris agreement and maybe doing even more," Greenpeace International's executive director Jennifer Morgan told The Associated Press.

Like many nonprofits, Greenpeace is fighting against a security decision to block off a 38-square-kilometer (almost 15-square-mile) "no protest zone" encompassing the airport where leaders will arrive and the conference center where they will meet.

The group is also calling for residents who live within the security zone to hang flags and banners out of their windows so that leaders will see them on the way in.

"Greenpeace stands for nonviolent direct action - we have peace in our name - and it would be a shame if violence moved the message away from what the G-20 should be doing on climate and other issues," Morgan said.

German Chancellor Angela Merkel has told community organizers in Hamburg that she understood the importance of demonstrations to express criticism and concerns, but urged that they remain non-violent.

"It should be peaceful criticism," she said in June.

Still, German security officials are preparing for the worst, drawing upon decades of experience dealing with violent May Day demonstrations and other protests at major events, including the G-7 in 2015 and G-8 in 2007.

In addition to the no-protest zone, tightly-secured transit corridors are set up to ensure that convoys will be able to keep moving lest they become a target for violent demonstrators or terrorists if they are stopped.

Germany has also denied Erdogan permission to hold a rally on the sidelines of the summit, which could have drawn huge protests from Kurds living in Germany.

Hamburg is boosting its police force with reinforcements from around the country and will have 20,000 officers on hand to patrol the city's streets, skies and waterways.

"You can be certain that you will see all of the equipment that German police have here in Hamburg," said Hartmude Dudde, who is leading the security team for Hamburg police. That includes both underwater and aerial drones.

They are 220 officers shorter than planned, however, after Hamburg sent home a Berlin contingent for partying excessively at their barracks, with police officers allegedly urinating on a fence and an officer dressed in a bathrobe dancing on a table with a weapon in her hand.

Of those who are on hand, Germany's counter-terrorist GSG9 force will be assisted by Austria's counterpart Cobra and specialists from the Netherlands and other countries, Meyer said. They'll be stationed around the city in strategic locations to help protect the summit's expected 6,500 participants from any attack.

"You can count on a very quick reaction time," Meyer told reporters. "Well under a minute, that's the concept. They are, in principle, everywhere."

Demonstrations need to be registered with authorities in Germany before going ahead - otherwise they're considered illegal and can be immediately broken up. That means that police can be expected to react swiftly to any "spontaneous" protests inside the security zone closer to where the world leaders are meeting.

On the outskirts of the city, a former wholesale supermarket has been converted into a special temporary prison with holding cells for 400 people, and judges on hand to decide whether there's enough evidence to keep them longer term or to set them free.

"This event will not be disturbed, of that I am certain."