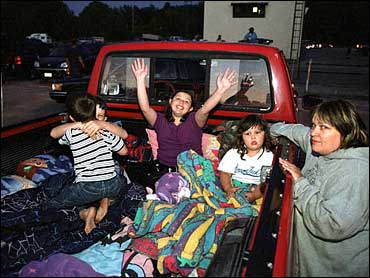 On a recent summer night when the sun set late, no one seemed to mind that the Memphis Drive-In wasn't starting "The Hulk" until 40 minutes after its 9 p.m. showtime.

As the projectionist waited for the sky to turn down the house lights, children squealed on swings in front of a 100-by-65-foot screen. Adults set up folding chairs in front of their minivans while a hypnotic voice from an old-time radio commercial droned over the drive-in speakers, "Enjoy a refreshing, ice-cold Coca-Cola."

No one paid attention to the time, which has a way of standing still at the drive-in.

Born in the 1930s from America's love of film and automobiles, drive-ins have survived despite 24-screen multiplexes, digital surround sound, reclining high-backed chairs and stadium seating.

They have done so by providing affordable double features, a family friendly atmosphere and a little nostalgia.

"It's just a very convenient and kind of magical place - the stars twinkling at night," said Randy Loy, co-executive director of the United Drive-In Theatre Owners Association. "It's freedom more than anything."

The number of drive-ins peaked in 1958 at 4,063, according to the Germantown, Md.-based owners' group, which has 145 member theaters in the United States and Canada.

As the movie industry struggled in the 1950s, mostly because of the popularization of television, Hollywood marketed heavily toward teenagers, who liked the privacy of the drive-in and the chance to show off their cars, said Joe Austin, assistant professor of popular culture studies at Bowling Green State University.

But rising land values and the popularity of malls, cable TV and VCRs later contributed to the dwindling numbers of drive-ins.

Today, there are 433 left in the United States. Ohio and Pennsylvania have 37 each, the most of any state. New Jersey, where the first drive-in was built in 1933, doesn't have any left, according to the drive-in association.

For Larry and Denise Maynard's five children, the drive-in offers the chance to romp on the flatbed of their pickup, eat a pizza, drink sodas, then climb into sleeping bags to watch movies and probably fall asleep during the second one.

Denise Maynard said her children aren't likely to sit still at an indoor movie theater. Plus, at the Memphis Drive-In, four of their children, all under 11, get in free. Adults pay $7 for two movies.

That means the three-screen drive-in near Cleveland relies on sales from concessions and a three-day-a-week flea market to keep going. Owner Russell Wintner, 51, said he and his partners have passed up opportunities to sell the land. The theater, started by his grandfather and three partners 50 years ago, has remained profitable, Wintner said.

"The Memphis Drive-In is one of those drive-ins that's kept chugging along," he said.

"I think they're doing very well," Judson said. "There seems to be a resurgence the last few years in drive-in attendance."

Loy said the industry is on an upswing. About 40 drive-ins have reopened and 20 new ones have been built since 1990.

Darci and Bill Wemple opened one this summer in Broadalbin, N.Y., a town in foothills of the Adirondacks where tourists visit in the warm months. The Wemples already owned a drive-in about 40 minutes away in a farming community.

"For the people that live there, it is their theater," Mrs. Wemple said. "For everyone else, it's a novelty draw."

She sees her patrons enjoying freedoms that can't be experienced at an indoor theater - bringing their own food, cozying up in a sleeping bag, smoking.

At the Memphis Drive-In last month, Roland Bonacci sat in a row of folding camping chairs with nine relatives. They arrived in three vehicles and brought pizza for what they called an affordable family outing.

"It seems like a lot more families now," Bonacci, 38, said of the crowd. "I remember it being a lot rowdier. Now, you see all these kids running around."

Some parents come with their infants, feeding them a bottle while watching the movie.

"You don't have to worry about a sitter," Bonacci said.

The Memphis Drive-In recently bought a new FM stereo transmitter so patrons can receive better sound on their car radios. But for nostalgia's sake it kept the drive-in speakers that hang on car windows.

He is accustomed to keeping 12 reels of film or more spinning at indoor theaters, so he may relax in the recliner. But he won't drop into a deep sleep.

"You have more pressure at a drive-in," Marcinik said. "They've got the horns. They express themselves more easily."

Michael J. Fox was in "7 years of denial" after Parkinson's diagnosis
Thanks for reading CBS NEWS.
Create your free account or log in
for more features.
View CBS News In
CBS News App Open
Chrome Safari Continue
Be the first to know
Get browser notifications for breaking news, live events, and exclusive reporting.