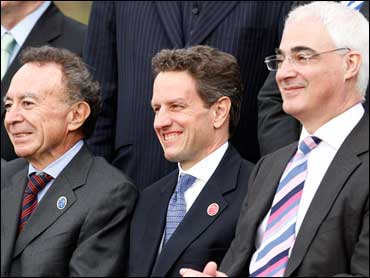 Finance officials from rich and developing countries pledged to boost the role of the International Monetary Fund and make a "sustained effort" to restore global growth after a key conference that sought to bridge deep divisions on how to tackle the financial crisis.

The key priority must be restoring frozen bank lending through cash infusions and dealing with the shaky assets souring bank's balance sheets, the gathered finance ministers and central bankers from the Group of 20 countries said in a statement at the end of talks in southern England.

The statement did not back a U.S. push for concrete, coordinated efforts for governments to spend more money to boost their economies. It acknowledged the importance of the stimulus efforts already in place, and called for stronger financial regulation.

But it left details on that and other topics undefined ahead of a much-anticipated summit of their heads of state and governments in London on April 2.

Downplaying signs of division between Europe and the United States, the group agreed that there was an "urgent need to increase IMF resources very substantially," although they did not commit to a figure, leaving that task to the upcoming summit.

Behind the overtures of harmony was a game of "show me the money" reports CBS News correspondent Mark Phillips. While the U.S., Britain and others have passed huge stimulus packages and are promising more, some of these governments have been less willing to commit to continuing investment just yet.

German Chancellor Angela Merkel, who was meeting British Prime Minister Gordon Brown today, wants to make sure the banking system is, in fact, shored up by the money that's already been spent before she agrees to spend more.

"It make no sense to pump more and more money in our economy whenever we haven't restored the confidence on the financial markets," said Peer Steinbrueck, Germany's finance minister.

Still, the meeting did establish some clear objectives, Phillips reports.

In addition to channeling more money through the International Monetary Fund to help struggling developing countries, the nations agreed that banking and financial rules should be tightened internationally to protect the system from the sort of meltdown it has been going through.

If there was a central message, it was, "We're all in this together," Phillips reports.

As U.S. Treasury Secretary Timothy Geithner put it, "A healthy U.S. economy needs a healthy global economy. Our recovery will be stronger if the world is stronger."

The nations also agreed on the need for regulatory oversight and registration of credit-rating agencies, widely blamed for fomenting the crisis by giving strong ratings to risky securities.

"We're prepared to take whatever action is necessary to ensure growth is restored and we're committed to do that for however long it takes to do that," said British Treasury chief Alistair Darling, who played broker between Europe and the United States, said.

Geithner, who had pushed for Europe to match Washington's $787 billion package of spending and tax cuts, said there was "broad consensus globally on the need to act aggressively to restore growth to the global economy."

Geithner said he was pleased with progress made at the talks on Friday and Saturday, but noted that the crisis was still playing out.

"This is a very challenging period and this is still evolving," he told reporters.

Darling also said that the G-20 had agreed to a clampdown on the supervision and regulation of hedge funds.

"We agreed that stronger regulation ... was necessary to prevent the build-up of systemic risk," he said.

The group also committed to fighting protectionism and pledged to help emerging and developing economies to cope with the loss of international capital flows, an issue that they have raised repeatedly.

The four major emerging economies at the meeting - Brazil, Russia, India and China - had earlier released their own joint communique, calling for a bigger role in the International Monetary Fund. The final summit statement agreed that IMF governance needs to reflect the changed global economy and the growing role of developing countries.

The wider G-20, representing countries that account for more than 80 percent of the world economy, have been in conflict over over whether to use fiscal stimulus - big spending packages and tax cuts - or better regulation to drag the world economy out of its slump.

The run-up to the gathering in a luxury hotel south of the British capital was marked by a trans-Atlantic dispute, with pointed comments from Washington that Europe was not doing enough fiscal stimulus.

European nations claim that increased spending on social welfare and unemployment is a form of stimulus that will support the economy - and makes the total European Union rescue package higher than the U.S. program.

The debate had led many to fear that the gathering of finance chiefs will fail in its task set a common agenda on key issues for a full summit of G-20 heads of state and government on April 2, a major concern as black economic clouds continue to roll in.

The World Bank warned this week that the global economy will shrink this year for the first time since World War II and the United States reported Friday that its trade deficit plunged in January to the lowest level in six years as the economic downturn cut America's demand for imported goods, dashing hopes of a U.S.-led recovery.