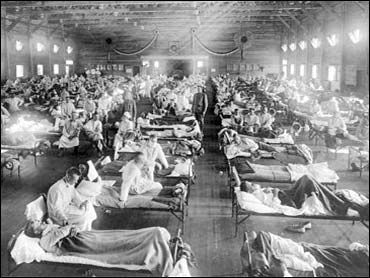 Governments must brace for a future flu outbreak because one will strike inevitably, the World Health Organization said Wednesday.

"Influenza pandemics are natural phenomenon, like earthquakes," said Klaus Stohr, coordinator of the global flu program at the WHO. "The problem is bad preparedness."

Influenza is highly contagious and has killed millions over the past 100 years. It has traditionally moved in cycles, and some scientists say a major outbreak is already overdue.

The 1918-1919 Spanish Flu outbreak killed up to 40 million people around the world, many more than World War I. There also were major outbreaks in 1957-58 and 1968-1969 that killed more than a million people each. The most virulent strains hit about every 30 years.

WHO has warned that 7 million could die in a new outbreak and that governments must do more to prepare — and try to cut the death toll.

"We're living on borrowed time," said Stohr. "But that gives us a chance to do things we should perhaps have done before."

Besides developing vaccines to combat new, potentially deadly flu strains, health authorities worldwide must boost surveillance, said WHO. The agency also called for better emergency plans that can be put in place fast if there is a pandemic — with clear quarantine rules and screening of departing passengers at airports, for example.

"Vaccines are often mentioned as the first line, but they are not," said Stohr. "They are just one pillar of the response."

The three flu pandemics that hit in the last century, and the ones that came before them, spread around the world before health officials had the chance to even identify the strain — let alone make and distribute vaccines to combat it.

Fears of a new global outbreak have been spurred by last year's epidemic of severe acute respiratory syndrome, or SARS, which struck hardest in Asia. The flu-like disease killed nearly 800 people worldwide.

Worries also have been stoked by bird flu, which swept through farms across Asia this year, ravaging the poultry industry as more than 100 million birds were culled in an effort to stop the spread of the virus.

The disease also jumped to humans, killing 12 people in Thailand and 20 in Vietnam. There is no concrete evidence yet of human-to-human transmission, but experts fear the virus could mutate to a form that could spread among humans, sparking the next global pandemic.

WHO also wants governments to boost cooperation between medical and veterinary authorities because of fears that animal flu could jump the species barrier.