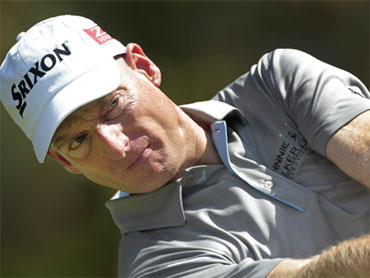 Jim Furyk headed to the first tee Saturday in the Tour Championship and heard his father and coach, Mike Furyk, give him a simple instruction to "just play golf."

It's a reminder he has uttered over the years not to get too caught up in mechanics or strive for the perfect swing, but to hit the ball, find it and get it in the hole as quickly as possible.

That might not be bad advice for Sunday, either.

Just play golf. Don't think about the $10 million at stake.

Furyk twice walked off a green happy to make bogey, made consecutive birdies late in his round that put him atop the leaderboard at East Lake and wound up with an even-par 70 for a one-shot lead over Retief Goosen and Luke Donald.

That set the stage for a FedEx Cup finale that has never had so many possibilities.

Furyk, Goosen and Donald all can win the FedEx Cup and its $10 million bonus by winning the Tour Championship, which comes with a $1.35 million prize of its own. So can Geoff Ogilvy, only three shots behind. Paul Casey and Charley Hoffman, both within five shots of the lead, can win golf's biggest payoff without even winning the tournament.

And there are enough video boards along the back nine that players should have a pretty good idea what they need to do.

"The first part of the scenario is I have to win, and the rest of it I can't control," Furyk said. "So the idea, really ... it makes it very simple. I have to win tomorrow, and the idea is just to go out and do the best I can to do that."

Furyk was at 8-under 202, and a victory Sunday could be a real breakthrough. He has never won three times in a season, and his third PGA Tour title this year might warrant strong consideration for player of the year.

Even so, Furyk is aware not only of how many players are behind, but how many possibilities exist.

-A victory gives Furyk or Goosen the FedEx Cup as long as Casey isn't the runner-up or Hoffman doesn't finish third alone.

-Donald can win the cup as long as Matt Kuchar, the top seed, doesn't finish second. Kuchar shot 72 and was 10 shots behind.

-Ogilvy, who shot a 72 was three shots behind at 5-under 205, can win the $10 million provided Casey isn't second, Hoffman isn't third and Kuchar doesn't find a way to finish seventh.

"In the past, we had an idea who was going to win, or who had already won," Goosen said, referring to Tiger Woods in 2007 and 2009, and Vijay Singh in 2008 when the points system was such that the Fijian had already clinched the cup when he showed up at East Lake.

It starts with playing well on Sunday, when the tee times will be early because rain is in the forecast that could dramatically change the fast, firm conditions of East Lake.

And as Donald showed in the third round, it all can change so quickly.

The Englishman was never out of the lead until he dumped his third shot into the bunker on the par-5 15th up the hill into a far corner of East Lake. He blasted out to about 12 feet, then ran his par putt 3 feet by. Donald hit the next putt too firmly to catch the grain, and he walked off with a shocking double bogey.

Furyk, who holed a 10-footer for birdie, suddenly had a two-shot lead.

"It was frustrating to give away a couple there," Donald said. "But I hit a lot of good shots today. I'm in great position — still just one back, and this is the last Sunday of the regular tour, and I've got a chance to win it all. So that's nice to know."

Goosen has a chance to cap off a solid year with a victory, something he has failed to do. His nine top 10s are second on tour only to Matt Kuchar, although the two-time U.S. Open champion has never come seriously close to winning.

What a time it would be to end that drought. Goosen was asked if ever imagined winning $10 million in a single day when he turned pro.

Ogilvy fell out of the hunt quickly, with a bogey on the first hole and a double bogey on the next one. He battled his way around, however, and finished with a 10-foot birdie putt that seemed to take 10 minutes to trickle down the slope and fall in the side of the cup. That left him only three shots behind.

And if anyone needed evidence a low score was available at East Lake, consider Nick Watney. His caddie has been calling him "Melba" all week because Watney is so tired from a long year — and with his wedding a month away — that he's toast. Watney had never heard of Melba toast, which was just as well. He resembled a jalapeno on Saturday, making seven birdies on the back nine for a 28, and shooting a 63 that put him all the way to 2-under 208 and in eighth place.

Phil Mickelson shot a 68 and was seven shots behind, enough to hope, but little more than that. He would need a victory to have any chance of winning the FedEx Cup for the first time. Lefty also needs to finish second to replace Woods at No. 1 in the world ranking.