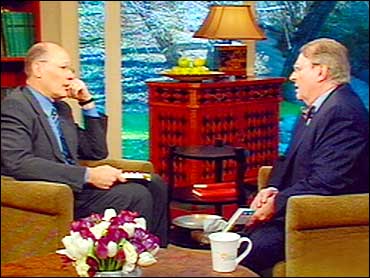 Hand-written letters were once a primary source of communication. Now with the advent of cell phones and e-mail, they're almost a thing of the past. Fortunately, CBS Newsman Charles Osgood has assembled a collection of missives from presidents, authors and artists that just might inspire you to pick up a pen and paper.

"Funny Letters From Famous People" was an easy book for Osgood to write, he says on The Early Show, because you don't have to really do the writing. All you have to do is find other people's clever things and put them in. But, it's just an exercise to edit."

Osgood himself admits he does not write letters.

"The only mail that goes out of my house is bills being paid," He says and notes if you are like him, "at least you can read some good letters from other folks."

Read an excerpt from "Funny Letters From Famous People" at the publisher's Web site.

He also anchors and writes The Osgood File, his daily news commentary broadcast on the CBS Radio Network. His commentaries have drawn one of the largest audiences of any network radio feature. Osgood was called "one of the last great broadcast writers" by his predecessor on Sunday Morning, Charles Kuralt.

Osgood was inducted into the National Association of Broadcasters Hall of Fame in 1990 and has received some of the highest accolades in broadcast journalism, including a 1999 International Radio and Television Society Foundation award for significant achievement.

He received his third Emmy Award in 1997 for his interview with American realist painter Andrew Wyeth for Sunday Morning.

The Osgood File has earned him five coveted Washington Journalism Review Best in the Business Awards, among other honors. Osgood received a 1999 Radio Mercury Award, a 1996 American Society of Composers, Authors and Publishers President's Award for outstanding coverage and support of music creators, and a 1993 Marconi Radio Award.

Osgood has anchored and reported for many CBS News broadcasts including the CBS Morning News, the CBS Evening News with Dan Rather, and the CBS Sunday Night News.

Before joining CBS News in September 1971, Osgood was an anchor/reporter for WCBS News Radio 88 in New York (1967-71). Prior to that, he spent four years on general assignment for ABC News.

Osgood was the general manager of the first pay television station in the United States, WHCT in Hartford, Conn., and the program director and manager of WGMS Radio in Washington, D.C.

He is the author of five other books. "Nothing Could Be Finer Than a Crisis That Is Minor in the Morning" (Holt, Rinehart & Winston, 1979) and "There's Nothing I Wouldn't Do if You Would Be My POSSLQ" (Holt, Rinehart & Winston, 1981) are compilations of some of his best radio broadcasts. "Osgood on Speaking: How to Think on Your Feet without Falling on Your Face" (William Morrow and Company, 1988) is a tongue-in-cheek guide for public speaking, and "The Osgood Files" (G. P. Putnam's Sons, 1991) is a compilation of his newspaper columns syndicated by Tribune Media Services. His fifth book, "See You on the Radio" (G.P. Putnam's Sons), was published in 1999.

Osgood holds honorary doctorates from St. John's University, Stonehill College, College of St. Rose, LeMoyne College, Trinity College, the College of Mount St. Vincent, Iona College, Caldwell College, Fairleigh Dickenson University, and Franklin and Marshall College. He also holds honorary degrees from Fordham University and St. Bonaventure, and serves as a trustee for both. He is an overseer at Colby College. He is also a trustee at the School of Strings in Manhattan, which he claims would never have happened if they had heard him play.

Osgood has performed with the Mormon Tabernacle Choir and has played the piano and banjo with the New York Pops and Boston Pops Orchestras.

He lives in New Jersey with his wife, Jean. They have five children. The National Father's Day Committee named him Father of the Year in 1985.