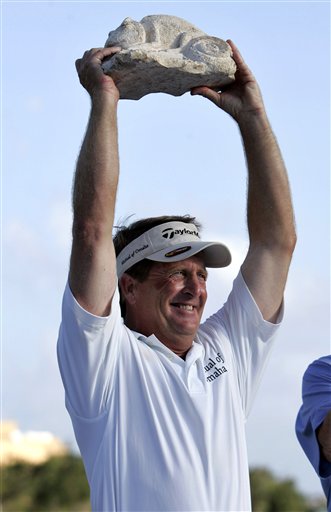 Fred Funk came to Mexico aiming to show the young guys on the PGA Tour that he could still play championship golf at age 50. And he managed to do it, despite a back problem that left him aching like an old-timer.

The 50-year-old Funk overcame the pain and a rocky final round to win the Mayakoba Golf Classic on the second hole of a playoff with Jose Coceres, making him only the second man to win on the regular tour after winning on the Champions Tour.

"It shows that the old guy has still got something," Funk said. "It's a very satisfying win.

"I think I validated how good the players are on the Champions Tour. Even though you are 50 or 51 through 55 ... age doesn't really mean anything. I just want to see how long I can last."

Funk led the tournament, the PGA Tour's first in Mexico, from the start, setting the course record with an 8-under 62 Thursday. He never lost the lead, but was tied several times, including from the 14th hole Sunday until sinking a birdie putt in the playoff.

The former University of Maryland coach closed with a 1-over 71, matching Coceres (69) at 14-under 266 on the Greg Norman-designed El Camaleon course. Funk then made things interesting by putting his fairway shot into a bunker on the first playoff hole.

"It was not an easy day for me out there today at all," Funk said. "I owe it to my putter and I think my intestinal fortitude."

The eighth PGA Tour victory of his career was worth $630,000. By comparison, his two Champions Tour titles _ the 2006 AT&T Championship and the Turtle Bay Championship last month _ were worth a combined $480,000, which is another reason he enjoys challenging guys young enough to be his kids.

In fact, tied for 13th place at this event was Kevin Stadler, whose father, Craig, was the first Champions Tour winner to claim a PGA Tour title, doing so back in 2003 when he won the Senior Players and B.C. Open on consecutive weeks.

Stadler had been the fifth-oldest PGA Tour winner, but at 50 years, 8 months and 12 days old, Funk claimed that honor.

Stadler and Funk both have a bit of an asterisk next to their feats because their 50-something wins came against fields diluted by other, bigger events _ the British Open for Stadler, the Accenture Match Play Championship for Funk.

"These guys can play all the way down to the bottom of the list," he said. "You've got to play well to come out on top."

Coceres was pleased to have done so well considering he's been playing soccer in Argentina most of this year. This was only his second tournament in 2007.

"It made me a little bit tight," he said. "The pressure caught up with me."

Australian Peter Lonard, who played with Funk and Coceres, birdied the final hole for a 67 to finish third at 13 under. Ryan Armour (66) was 12 under, and Bill Hass (67) followed at 11 under.

Funk came into the final round with a two-shot lead and a back problem that bothered him so much Saturday he wondered whether he'd be able to finish.

He got off to an ominous start Sunday when his very first shot rolled to the lip of the "Devil's Mouth," the opening to an underground cave in the middle of the fairway. He had two bogeys on the front nine and wound up tied at the turn _ and lucky to even be that close.

Funk made a tough putt to save bogey on No. 8 ("That felt like a birdie," he said.) and Coceres was consistently just-missing on putts before finally getting a birdie at No. 9. Worse yet, Funk's back pain flared up on the fifth fairway, causing him to lay down for massages from his wife on the sixth tee and from a tour therapist at the 12th tee.

"Then I found a stretch, putting my (left) leg on top of my (right) knee, working that one spot," he said. "I was fine coming down the stretch."

Funk reclaimed the lead with a birdie at 13, then made a bogey on 14. Coceres made about a 10-footer to keep iknotted on 15, then nearly putted in from off the green at 16, patting his heart and smiling after the ball curled around the lip of the cup.

More close calls prevented the Argentine from giving the tour's first trip to Latin America a winner from Latin America: Birdie tries on 17 and 18 that didn't fall, then his opening on the first playoff hole _ No. 18 again _ after Funk found a bunker. From about the same distance he had when playing the hole a few minutes earlier, Coceres left it way short.

On the second playoff hole, the par-3 10th, Funk put a 4-iron within six feet. Unlike Coceres, Funk knocked his potential winning putt with so much confidence that he threw a victory punch before the ball even fell.

The victory was Funk's first on the PGA Tour since The Players Championship in 2005. It wasn't his first title in Mexico, though _ he won the 1992 Mexico Open.

Funny thing is, Funk almost backed out of this tournament. He committed to playing the Champions Tour event in Florida, but came here because he'd promised them long ago.

He's planning on returning to the Riviera Maya next year, and perhaps for many more years. The tour has a contract with this event through 2012 _ and Funk will be only 55 then.