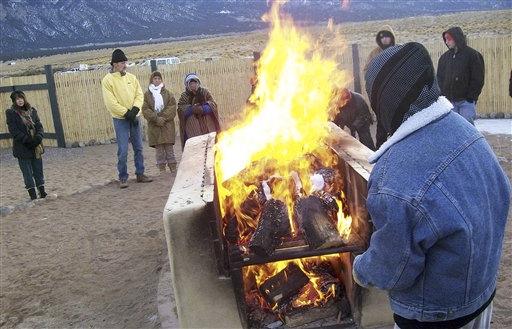 CRESTONE, Colo. (AP) - Belinda Ellis' farewell went as she wanted. One by one, her family placed juniper boughs and logs about her body, covered in red cloth atop a rectangular steel grate inside a brick-lined hearth. With a torch, her husband lit the fire that consumed her, sending billows of smoke into the blue-gray sky of dawn.

When the smoke subsided, a triangle-shaped flame flickered inside the circle of mourners, heavily-dressed and huddling against zero-degree weather.

The outdoor funeral pyre in this southern Colorado mountain town is unique. Funeral and cremation industry officials say they are unaware of any other place in the nation that conducts open-air cremations for people regardless of religion. A Buddhist temple in Red Feather Lakes, Colo., conducts a few funeral pyres, but only for its members.

Ancient Vikings lit funeral pyres to honor their dead, and it is accepted practice among Buddhist and Hindu religions. But the practice is largely taboo in the U.S.

The pyre harkens to references in the Christian and Hebrew Bibles equating rising smoke with the ascent of the soul, said David Weddle, a religion professor at Colorado College. It can be seen as honoring a natural cycle, reducing the body to ash and the elements of which it is composed. It also can be a protest against traditional funerals, which some view as a denial of death, Weddle said.

Ellis' ceremony and others seem somehow fitting for Crestone, home to an eclectic mix of spiritual and religious groups that include Zen and Tibetan Buddhists and Carmelites, said Stephanie Gaines, director of the nondenominational Crestone End of Life Project, the volunteer group that performs the cremations.

While Belinda Ellis "did not have a religious bone in her body," according to her husband, Randy Ellis, she had attended a Crestone funeral pyre and told her family it was what she wanted. Ellis, 48, died of a massive heart attack Jan. 9 and was cremated three days later.

"As a culture, we need to say goodbye," Biggins said. "And I think watching some of the things that this organization is doing for their community, the word that comes to my mind is, 'Hooray!' Because they're encouraging people to bear witness."

The Crestone End of Life Project conducted its first open-air cremation in January 2008 and has performed 18 since. Each pending cremation sets in motion phone calls to the Saguache County Sheriff's Office, the fire department and the coroner. State and local agencies have given permits to the group to conduct the cremations.

The project asks $425 per cremation, though families can give more. Volunteers counsel grieving family, help arrange the deceased to repose at home before a cremation, and prepare the hearth with kindling the day before the ceremony.

The service is offered only to the small number of people who live in the area. Crestone proper has about 100 residents, but some 1,000 others live in the adjacent development of Baca Grande, who also qualify for the service, as do the residents of the nearby town of Moffat, population 112.

The decision to limit who can be cremated was made to honor the wishes of the community, which did not want out-of-towners coming to Crestone, and because the project isn't big enough to handle more ceremonies.

Gaines said she's received inquiries from Montana to New York but has had to turn them away.

"What it comes down to is having it reflect the aspirations of the community," Gaines said. "Because you can't really do it on your own."

It takes up to four and a half hours for a body to burn completely. Since there's no way of separating human ashes from those of the wood the family receives about five gallons of ashes.

Relatives are sometimes apprehensive when a family member declares a desire to be cremated in a funeral pyre.

"I just thought it was crazy at first when I heard," Randy Ellis said. But by the end of it, he said, he wants the same service for himself.

By all accounts, Belinda Ellis was a free spirit. During the last years of her life, she lived with her husband and her boyfriend, Skip Benson, 59.

"We had a friendship between the three of us that very few people could share," said Randy Ellis, 51.

Belinda's relatives described her as a giving and stubborn person who loved motorcycles, the outdoors, and smoking pot. Amid the scent of juniper and burning wood was a smell of marijuana from a bag that someone dropped into the pyre. Someone joked that perhaps they also should have poured in some Pabst Blue Ribbon.

Quiet, otherworldly chimes sounded from crystal bowls that a woman played at the beginning of the service. On a table were flowers and pictures of Belinda Ellis and her family. Other ceremonies are more elaborate, with as many as 200 people attending, or even featuring a New-Orleans style funeral march.

Her relatives carried her from a car on a wooden stretcher and placed her on top of the steel grate. The site is encircled by a bamboo fence.

"What was a physical body will become one with the sky," said William Howell, a project volunteer.

Crestone is nestled at the foot of the Sangre De Cristo mountain range, some 200 miles southwest of Denver.

Sangre De Christo means "blood of Christ," and legend has it that the name comes from a Catholic missionary priest whose dying words were "Sangre de Cristo" after seeing a sunset over the mountains. Native Americans are said to have called the area "The Bloodless Valley" because it was so sacred no bloodshed was allowed.

"Being in this setting, you realize that we're all just part of nature," Randy Ellis said. "And she's just rejoined nature in another form. It's all that's going on here."