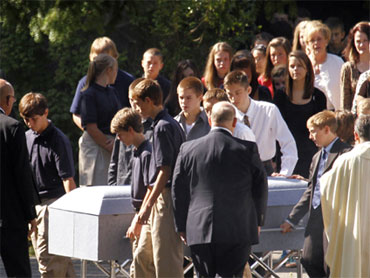 Family members cried and hugged each other for support as pallbearers carried the casket of 13-year-old motorcycle racer Peter Lenz after his funeral Friday at St. Joseph Catholic Church in Vancouver.

Lenz was killed Sunday when he fell off his motorcycle and was run over by another rider at the Indianapolis Motor Speedway in a warm-up for a U.S. Grand Prix Racers Union event.

Autopsy results confirmed Lenz died of multiple blunt force trauma. He is the youngest driver or rider to be killed at the 101-year-old speedway.

Lenz earned an "expert" license at age 11 from the American Federation of Motorcyclists. In March 2009, he became the youngest rider to win an AFM race. Lenz had four wins in the Grand Prix series this year.

Search giant want to integrate internet-enabled products for the home with security technology.

Thirteen players and staffers on the Cardinals have tested positive for the coronavirus.

The president continues to to tout his administration's successes as deaths and cases climb.