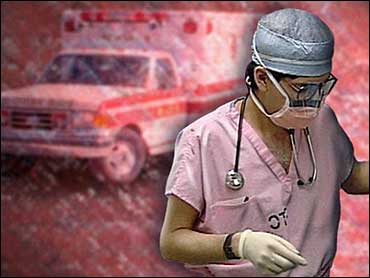 So did funeral director John Matarese - until he heard a gurgling noise coming from the body bag.

"It scared me half to death," says Matarese. "The girl was alive."

The woman, whose name was not released, was found Saturday in a tub of cold water in her apartment in Ashland, a suburb of Boston.

Police officers and emergency medical technicians say they were unable to detect any signs of life, made an initial determination that she appeared to have killed herself with an overdose of pills, and took her body to the John Matarese Funeral Home.

"The fact that they didn't take her to the hospital, just assumed she was dead, is the big mistake," said Dr. Murray Hamlet, a hypothermia resuscitation expert in nearby Natick, Mass. "People have to understand that cold, stiff, blue people can be resuscitated."

The woman's father and brother arrived shortly after she was taken from the funeral home to MetroWest Medical Center in Framingham, where she was treated and then transferred to another medical facility.

The Boston Globe reports police had initially been called to the scene at about 2 a.m. Saturday, to respond to neighbors' complaints of loud noises coming from the woman's apartment.

Police did not actually enter the apartment, however, until 8:30 a.m., when the apartment building's property manager let them in, according to Dexter Blois, Ashland town manager.

Seeing the body, police then called the fire department, and three hours later, the woman was taken to the funeral home.

"All I can really say is - it's a miracle," said Blois, in an interview with the Globe. "She was in the right place at the right time. She appeared lifeless and there was more than one person who made the judgement that she was not alive. I don't think we have anything to be sorry about. We're just lucky."