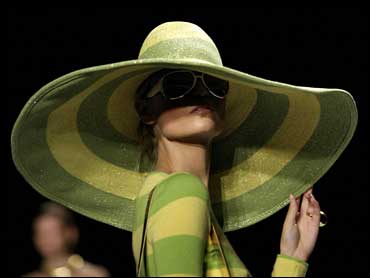 Let's see if we can sum this up… Next year, you may be adding a few pieces of '70s or '80s retro to your wardrobe. You might look for something that's romantic but not too fussy. Bright colors are "in," and even bright prints. Think Picasso, or maybe tropical sunset. Here are a few highlights from New York Fashion Week to give you an idea or two.

For all the lovely dainty dresses that retailers, fashion editors and stylists have seen at Fashion Week, Kors offered the opposite in splashy and sunny clothes, ranging from a form-fitting rainbow color-blocked sweater dress to a floral ruffle bikini in a print done in the spirit of the artist Seurat.

The audience, which included Jessica Simpson, got into the joyous spirit of the show when a glittery pink dress came down the runway to the soundtrack of "Xanadu."

He did not forget, though, that his fans depend on him for their daily dose of luxury. He delivered that with a gold brocade tunic and a black-crystal jersey jumpsuit with a halter top.

"It had the flavor of the '80s with it's A-lines, ruffles and easiness, but it had the classic preppy colors," Graham said.

Kors tapped into the bare shoulders and longer hemlines that fit with the 1970s and '80s retro moment we're having, Graham said, but
he alone owned the skinny, body-hugging knits.

Top Guns On The Runway

2 DIANE VON FURSTENBERG
Diane von Furstenberg used her spring-summer collection as an excuse to escape from everything she's known for.

The wrap dress that is her hallmark was barely visible on the runway, and the best one that was there, a shiny shantung dress done in safari style, was almost unrecognizable without von Furstenberg's reliable jersey fabric.

She also did fewer workday ensembles, instead concentrating on outfits for a summer vacation to a remote locale, or at least for hanging out poolside. Safari-inspired looks dominated, with a white linen suit looking particularly fresh. There also were loose, airy dresses in tropical floral prints best pictured over a swimsuit.

Von Furstenberg used plenty of the pink and orange that have emerged as key colors of next season but she also played with the ocean shades of blue and green, as well as sandy neutrals.

A group of chiffon "pirate" garments were romantic without fussy trappings. Maybe Kiera Knightly could borrow the ethereal white blouse with rope-style trim if there ever is another "Pirates of the Caribbean" movie.

3 ANNA SUI
There's been a lot of talk about happy, sunny clothes at New York Fashion Week as spring collections are previewed on the runway. But until the Anna Sui show Monday night, there hadn't been many signs of happy, sunny models. Apparently all it takes to make catwalkers come to life are colorful wigs, playful clothes and a soundtrack that includes the old Andrews Sisters hit "Boogie Woogie Bugle Boy."

The first look on the runway was a bolero with black sequins, a multicolored diamond-print blouse and plaid shorts. Is someone likely to wear it to work next season? Probably not, but it sure looks good on the runway.

For parties, and deep down Sui is a party girl, there were shorts with tiers of ruffles on the behind and a shirtdress with a plaid pattern featured on a sheer fabric.

A black-and-white striped sateen coat worn with a bow blouse and white linen shorts had a 1970s vibe, as well as many of the scarf- and shirtdresses done in prints with bold colors.

But the era of the '30s and '40s was apparent, too, in the Art Deco architecture influences as well as all the satin, silver, fabric flowers and the parasol that one happy young lady carried down the runway.

4 MARC JACOBS
Marc Jacobs is considered the bellwether designer of American fashion. So, what's the outlook for next spring?

Um, a lot of lingerie?

Jacobs presented his spring collection to a packed crowd that had been waiting in the Lexington Avenue Armory for two hours. (Celebrities such as Victoria Beckham and Sheryl Crow didn't wait quite as long - they seemed to know to show up "fashionably late.")

But it looked like he could have used a little more time. Models were wearing what Jacobs called "scrap tops" and "one-half gowns" - clothes that one presumes were left unfinished to make an ironic statement - thus, giving the audience plenty of glimpses of their silk, satin and crepe bras, slips and tap pants.

On their own, individual elements of the outfits, such as a black lace cape or a moire sleeveless trench coat, were very attractive, but wearable clothes wasn't the point. Surely some of the stylists, retailers, editors and fashion fans went home shaking their heads.

Jacobs, however, definitely had a plan. The entire show was staged backward, beginning with his bow, then the finale and then running through the looks, starting with No. 56 and ending with No. 1, a denim cape and sequined gown.

Even with all this "message," the collection largely fit into some of the more important trends emerging from New York Fashion Week: color-blocking, sheer overlays, sequins, and nude and natural colors with bright pops from purple, pink and orange.

5 NANETTE LEPORE
There were no rules of the runway for Nanette Lepore: Stripes were mixed with florals, bright orange and pink blended with gray and beige, and linen was paired with lace.

Lepore was inspired by Picasso for the collection presented Monday. She used a lot of all-over prints, especially on wispy below-the-knee dresses, including an adorable strapless collage-floral sarong and flounce dress. Shorter dresses that seemed like mini-kaftans were called "swim dresses."

Pants were short, too, with exaggerated wide legs but otherwise tailored and ready to go to work. She paired them with a series of one-shoulder tops or a jacket with a bow.

Lepore could not decide if one swirl-print number was pants or a dress, so she called it "pants-dress," but from the audience's perspective it looked like a jumpsuit - which is becoming increasingly ubiquitous.

Like many of her peers, Lepore outfits models in shoes that she also designs. She has a higher-end signature shoe label but she does them for Keds, too, and there was one shoe from that collection - a canvas wedge with an ankle strap - that might give espadrilles a run for their money next year.