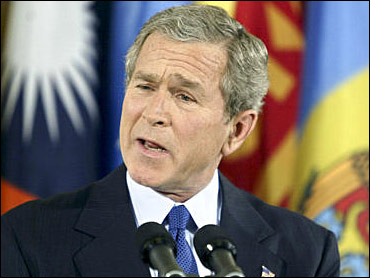 
President George W. Bush marked the one-year anniversary of his war to oust Saddam Hussein from power by speaking to the nation from the East Room in the White House, surrounded by the flags and diplomats representing his coalition partners in the war on terrorism. They were gathered, Mr. Bush said, "united against a common danger."

Terrorism, not Iraq, was Mr. Bush's main theme and therefore presented by him and his administration as the focus of attention. All week, other senior administration officials have made what seem like non-stop media appearances to defend America's actions in the last year, for the most part focused on what's happened in Iraq since the first bombs and cruise missiles fell on Baghdad a year ago.

Secretary of State Colin Powell timed a trip to South Asia and the Middle East to allow him to turn up in Baghdad to visit the troops on this key date. Back in Washington, the National Security Advisor, Dr. Condoleezza Rice, did interviews with all the television networks and with some print reporters; last Sunday's talk show hosts were served up a senior administration official to promote the progress made in Iraq after a year; and the Chairman of the Joint Chiefs of Staff, Gen. Richard Myers, has answered the nagging questions of reporters about the continuing deaths of Americans in Iraq, long after Saddam himself was captured by U.S. military forces.

In sum, the most effective full court press this week has been not from one of the college basketball teams participating in March Madness, but from those in the White House communications office who manage the Bush administration's public image.

The need for such orchestration is obvious. For every accomplishment which can be pointed to in Iraq, there is an almost daily reminder of how difficult and dangerous the road ahead still is. Yes, 240 hospitals have been rebuilt and 5 million Iraqi kids are back in their classrooms. But not only do U.S. soldiers remain targets of disaffected Baathists and jihadists, we are now seeing civilian aid workers being targeted.

It's great news — and a real accomplishment — that oil production and the availability of electricity are back at or near their pre-war levels. But it's unsettling to say the least that a car bomb loaded with a thousand pounds of explosives and artillery shells can go off in front of an unprotected Baghdad hotel when U.S. forces are in charge of security in Iraq's capital.

Much credit should be given not only to America's military forces in Iraq but also to the several thousand civilian government employees who are working under tough conditions and a lot of pressure from Washington. Building, or rebuilding, a government structure to run a country of 24 million people is not done easily or quickly, under the best of circumstances. Toss into the mix a deadline of June 30, by which the U.S. has agreed to turn sovereignty over to some yet-to-be-determined Iraqi transitional government, and the requirement that that government has to be democratic in nature (a totally new concept in Iraqi politics). The result is a road ahead with more twists, turns, potholes and pitfalls than even the best-intentioned occupiers in history might have navigated successfully.

And there's more. Many Iraqis and some of our coalition partners want the United Nations back in Iraq, and perhaps with more authority than the Bush administration has been willing to cede in the past. Working out that future arrangement is one of the bigger hurdles to cross in the next several months. Keeping our coalition partners on board has become another issue since Spain's pro-Bush policy prime minister, Jose Maria Aznar, was defeated in recent elections and his replacement has threatened to pull out the 1,300 Spanish troops in Iraq.

Finally, almost all the decisions the Bush administration now makes, or will make before June 30, have to be seen through the prism of this year's presidential election campaign. Whether things turn out to be good or not so good for Iraqis, the overriding concern in Washington is how things turn out for Mr. Bush.

To paraphrase an old saying attributed to the father of the current president, then-candidate George Herbert Walker Bush, at a time in the 1980 campaign when he was losing primaries to Ronald Reagan, "Nobody said it was going to be easy. Nobody was right."