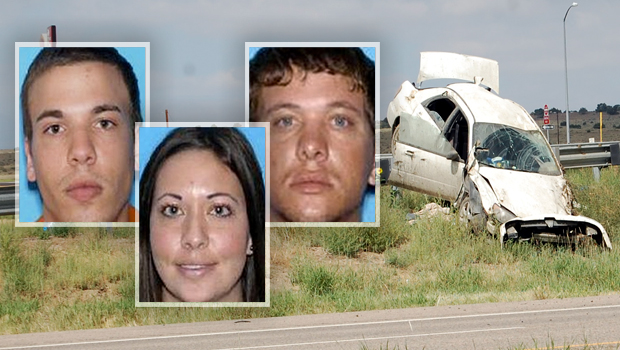 DENVER - Three fugitive siblings being sought for alleged crimes in Florida and Georgia were captured Wednesday in southern Colorado, crashing their vehicle on Interstate 25 after a short chase during which they fired shots at their pursuers, authorities said.

The trio -- Ryan Edward Dougherty, 21; Dylan Dougherty Stanley, 26; and Lee Grace Dougherty, 29 -- had been targets of a weeklong nationwide search. FBI Special Agent Steve Emmett confirmed that the three were in custody in Colorado.

The Colorado State Patrol said the trio was captured near Walsenburg, in southern Colorado. That's about 85 miles south of Colorado Springs, where the siblings were believed to have been spotted on Tuesday.

Patrol Chief Col. James M. Wolfinbarger said someone reported a car matching the description about 9 a.m., and that troopers spotted the car south of Pueblo about a half-hour later. Troopers tried to stop the car, but the driver eluded them.

During the ensuing chase, the suspects fired shots at troopers, though troopers didn't return fire. Wolfinbarger said the car crashed on Interstate 25 near an exit, but no details were available. He said the suspects were taken into custody, including one of whom was arrested after a foot chase.

Wolfinbarger said he had been concerned that the search for the fugitives would be dangerous.

"I had a strong concern. I was worried about the safety of our troopers. To have them shooting at you and continue the pursuit, those men are brave," he said.

Heather Cobbler, a spokesperson for the Colorado State Patrol, told CBS4 that at least one of the Dougherty siblings was hit by gunfire in the chase, but was suffering a non-life threatening injury. She could not verify injuries for the other suspects.

A weeklong nationwide search for the trio shifted to Colorado after the sighting in Colorado Springs where authorities say they believe the trio made a purchase at an outdoors store and could be headed to a campground or rural area to try to avoid capture.

The three are suspected of firing at least 20 shots at a Florida officer who tried to pull them over for speeding in a chase at speeds up to 100 mph.

Hours later, three people wearing masks robbed a bank in Valdosta, Ga., about 210 miles north. One robber brandished an AK-47 assault rifle while another was photographed by a security camera waving a machine pistol, the FBI said.