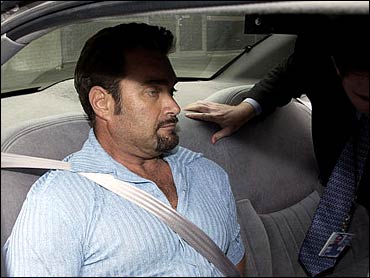 Cosmetics heir and convicted rapist Andrew Luster is back in the United States. Luster, who was picked up in Puerto Vallarta, Mexico, on Wednesday was escorted to Los Angeles the next day by two FBI agents who then turned him over to authorities in Ventura County.

That's not new business for Ventura County: Luster was tried and convicted in absentia there last January - for multiple counts of rape, poisoning and drug possession - and was sentenced to 124 years behind bars. That conviction came only a few days after he disappeared - forfeiting one million dollars in bail as he became a fugitive.

U.S. officials focused on deporting rather than extraditing Luster, because deportation was by far the easier and fastest way to force his return to the U.S.

Mexico opposes life sentences and usually refuses to extradite people who could face them, although U.S. Embassy spokesman Jim Dickmeyer said Luster's 124-year sentence "does not appear to fit the category that causes concern for them."

The cosmetics fortune heir had been staying at a $34-a-night hotel beside a police station and had just ordered tacos at a street stall when bounty hunters tackled him Wednesday.

The scuffle allowed police to recapture Luster, the Max Factor cosmetics heir who had skipped bail shortly before he was convicted in California of drugging and raping three women. It also left three U.S. bounty hunters and two reported cameramen facing potential charges of kidnapping in Mexico.

Local police spokesman Sebastian Zavala said Luster had been living in Puerto Vallarta for about a month. Bounty hunters tracked him down shortly after 5 a.m. Wednesday about two blocks from the beach at an open-air streetcorner taco stand, where a bare bulb dangled above sizzling meat and seared jalapeno chiles.

"Mr. Luster was up to his usual tricks," bounty hunter Duane "Dog" Chapman told CBS News Correspondent Hattie Kauffman. "There were people sitting around in a party atmosphere. Beer bottles. Everybody was lookin' pretty relaxed."

Luster had just ordered two 38-cent beef tacos from 18-year-old Giovanni Balbuena. "I put the tortillas on (to heat) and they fell on him," Balbuena said.

"I didn't know if it was a kidnapping or a movie," said Alberto Franco, 26, who was working at the gas station across the street.

Balbuena said the bounty hunters threatened Luster with tear gas, wrestled what appeared to be handcuffs on him and drove away in two cars. Franco said taxi drivers notified local police.

Police officers caught up with the fleeing cars about 2½ miles northwest of town and arrested the lot, according to Zavala.

Luster was held for several hours at the city police station and was then turned over to the federal Justice Department.

Inda said the other five people detained could face state charges, such as kidnapping. U.S. bounty hunters have no legal authority to make arrests in Mexico and such cases have been politically sensitive here since 1990, when the U.S. Drug Enforcement Administration employed local bounty hunters to kidnap a doctor accused of involvement in the murder of an anti-narcotics officer.

McLaughlin said the bounty hunters will get the usual help from the U.S. consular officials in Mexico, but no more.

"If you're going to act as a private citizen in a foreign country, you assume certain risks," he told CBS News. "They're not going to get special treatment. They assumed that liability by going into Mexico and acting as private citizens outside of any type of FBI coordination."

FBI spokeswoman Laura Bosley in Los Angeles said that an American couple who had met Luster in Puerto Vallarta saw him pictured on television after their return to the United States and tipped off the FBI and a bounty hunter.

Luster apparently spent the last days before his arrest surfing and staying at the Motel Los Angeles, a tidy establishment that usually charges $34 a night. It is flanked on one side by the federal justice department's local office and on the other side by the high green walls of Military Base 41-B.

"We gave him a discount" because he had stayed there a year earlier, said deputy hotel manager Oscar Lopez, who said Luster was attracted by the "tranquil and secure" atmosphere created by the police and soldiers.

He described Luster as a "very cultured," friendly man who spoke excellent Spanish.

Ventura Country Sheriff Bob Brooks said he believed that "none of the bail money would be going to the bounty hunter."

He added, "There was a $10,000 reward, put up half by the Federal Bureau of Investigation, half by the sheriff's office, that would possibly be eligible for the person that assisted us."

Zavala said the two television crew members told police they worked for "America's Most Wanted." The show denied that.

Authorities said Luster, who lived off a trust fund and real estate investments, took three women to his home between 1996 and 2000 and raped them after giving them the so-called date-rape drug GHB. Some of the encounters were videotaped.

CBS News Correspondent Troy Roberts had an exclusive interview with Luster for 48 Hours last fall. Roberts says Luster showed no remorse or regret for his crimes.

"I kept giving him an opportunity to say 'I'm sorry, I regret what I have done,'" said Roberts. "This man was arrogant. He had a sense of self-entitlement... He didn't want to sacrifice his lifestyle of surf, women or sun."

A California appellate court last week rejected an appeal of Luster's conviction, saying he had forfeited his right to appeal by jumping bail. The California Supreme Court is expected to be asked to review the decision.

One of Luster's victims, identified only as 23-year-old "Shauna Doe," told CBS News she was upset when Luster escaped. The fear of him never being caught tormented her night and day. Her attorney, Barry Novack, said she was thrilled by news of his capture.

"Shauna has not been able to escape from the torment that she went through," Novack said. "Now we're waiting for civil justice to be done by bringing him to account for the terrible things he did to her and to the other women."