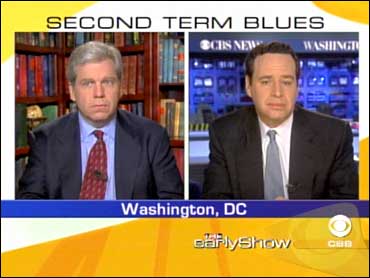 Republicans have been tossing around "repeal" as their new battle cry regarding the recently passed health care reform, but GOP commentator David Frum said such efforts would be "literally impossible" to follow through on.

During an appearance Monday on ABC's "Good Morning America," Frum, a former speechwriter for President George W. Bush, said Republicans should instead focus on "fixing its worst effects."

As for the divisive partisanship enveloping Washington, Frum laid the blame at President Obama's feet.

But it has been Frum's criticism of his own party that has made news recently. In a widely circulated blog post written the same day the House approved the Senate's reform bill, Frum said Republicans had "suffered their most crushing legislative defeat since the 1960s."

Not only had the GOP experienced their very own "Waterloo," as Frum wrote, but they were largely responsible for it.

"A huge part of the blame for today's disaster attaches to conservatives and Republicans ourselves," he wrote. "At the beginning of this process we made a strategic decision: unlike, say, Democrats in 2001 when President Bush proposed his first tax cut, we would make no deal with the administration. No negotiations, no compromise, nothing."

The Wall Street Journal editorial page blasted Frum as "the media's go-to basher of fellow Republicans" who was "peddling bad revisionist history that would have been even worse politics."

And last Thursday, Frum was forced out at the conservative American Enterprise Institute. Frum told Politico that donor pressure following his "Waterloo" post led to his ouster.