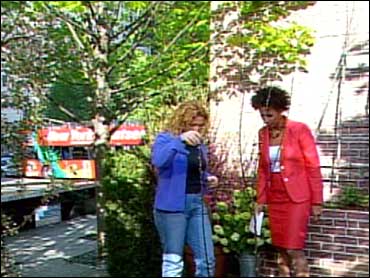 If you are looking for something beautiful yet functional for your garden, why not consider planting a fruit tree?

British gardener Charlie Dimmock, with co-anchor Rene Syler on The Early Show, talked about how to choose, plant, prune and take care of a fruit tree, as well as how to train it against a wall. Examples were provided by Henry Leuthardt Nurseries.

Dimmock says fruit trees are amongst the tallest plants in the garden. They have extravagant flowers in the spring, fruit in the autumn and, even when the trees are bare in the winter, the trunks and branches make satisfying patterns against the sky or wall.

Dwarf trees can be grown in small spaces, against walls or in containers, according to Dimmock.

In general, a dormant period of 45 days, with temperatures of 45 degrees F or less, is needed for a fruit tree before it blossoms. Extremely cold winter temperatures over a long period kill blossom buds. The apple is the most hardy and is generally resistant to –25 degree F. The peach and nectarine are least hardy and suffer blossom bud damage at –12 degrees F to –15 degrees F.

After the apple, the plum is next hardiest, followed by the European plum, sour cherry, sweet cherry, Japanese plum and the apricot, which is about as hardy as the peach.

Soils should drain water properly, and water should not stand on top of ground for more than one week after a heavy rain.

Espaliered Trees
Dimmock says the small, single-stemmed trees are cheap and can be trained from scratch. Specialist growers sell partly trained trees. The espaliered trees are ready-made and should flower and fruit in the first or second year.

Dimmock says to buy two trees, because most apple trees need to grow near another apple tree that flowers at the same time for cross-pollination.

Training a young plant to grow against a wall or along a wire trellis not only saves space, it can create beautiful ornamental effects. In Europe, espaliers are widely used in orchards for commercial fruit production, and the practice is becoming more common in the United States.

If you are planning to espalier a tree, Dimmock says you must use a dwarf specimen, because a standard fruit tree will shortly become too large to train. Dwarf fruit trees are sold as grafted root stock of a true dwarf species, which has "bud wood" from a standard species grafted on. When the tree is planted, the graft union must remain above ground, or the tree will sprout roots above the graft and lose its dwarfing capability.