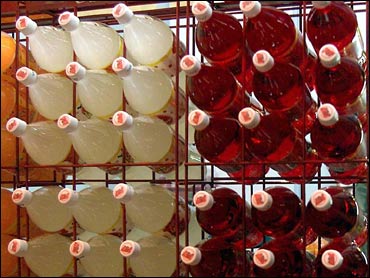 (CBS) If you're consuming a lot of fructose, look out.

A new study found increased rates of borderline high blood pressure amongst people who consumed at least 74 grams of fructose a day - about four soda's worth.

"There is no question that fructose itself appears to have effects that other sugars don't have," Dr. Michel Chonchol of the University of Colorado Denver, who worked on the study, told Reuters.

He cautioned that consumers should look out for products with high-fructose corn syrup, which can have high levels of fructose.

"In the grocery store, you see food without high-fructose corn syrup," he said, telling Reuters that consumers should opt for them.

Over consumption of sugar, no matter what its source, is a major cause of diabetes, stroke and heart disease, says the American Heart Association.

Still, fructose seems to have a special roll in raising blood pressure, according to the study which appears in the Journal of the American Society of Nephrology.

Some people remain unconvinced. The Corn Refiners Association (high-fructose corn syrup is made from corn) claims the study was flawed, and the American Beverage Association also objected.

"This study, which looks at fructose intake, furthers the confusion and misunderstandings about high-fructose corn syrup and sugar-sweetened beverages," Dr. Maureen Storey of the Beverage Association  said in a statement.

The industry claims that once fructose is absorbed into the blood it's not better or worse than other sugars.

Dr. Story said no true cause-and-effect relationship has been proven, a point upon which University of Colorado researcher Michael Chonchol agrees. A  clinical trial comparing the effects of fructose to other kinds of sugars is needed, he told Reuters.