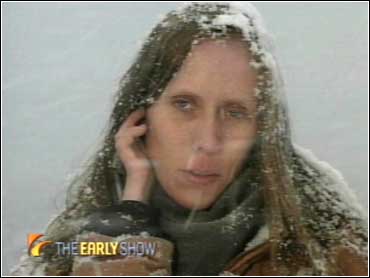 Dr. Anna Bagenholm made medical history in May, but not in the operating room. She did it trapped under ice, without a pulse, as her body temperature dropped to the lowest ever recorded in a human being.

A survivor of the worst case of hypothermia ever seen, Bagenholm spoke with CBS Early Show Anchor Bryant Gumbel on Thursday.

Bagenholm, a 29-year-old doctor studying to become an orthopedic surgeon, was skiing a favorite trail of hers outside Narvik, Norway, with two friends, also young doctors. She usually skied after work. But her May 20 outing was anything but routine.

"I remember what happened two days before and after waking up, like two weeks after," Bagenholm says.

"I don't remember anything about the accident. I think that's really good," she adds.

That's because the accident was one that most would find terrifying: While navigating her skis around a waterfall, Bagenholm fell head first into the water and was trapped between ice and rocks.

As her companions held on to her skis and called for help on a mobile phone, frigid water doused the young woman. For 40 minutes she struggled, finding an air pocket and somehow remaining conscious. But then she was overcome, and her friends clung to her lifeless body.

When rescuers arrived, the young woman had been submerged for 80 minutes. She had no pulse, her blood wasn't circulating, and her pupils were very dilated. An emergency team started CPR until a helicopter arrived, and Bagenholm began the hour-long flight back to Tromso University Hospital.

That's where Dr. Mads Gilbert, an anesthesiologist and chief of Tromso's emergency room, took over. Thanks to Norway's harsh climate, Gilbert had seen severe cases of hypothermia before, and he says that he knew what to do.

"We took her to the operating room. We continued the resuscitation. We connected her to a bypass machine and gradually and carefully, the team would warm her up by warming up her blood," Gilbert says. "After some time, her heart started beating again and gradually her body temperature came up to normal."

Very gradually. Over 100 doctors and nurses worked for nine hours to bring Bagenholm back to life.

But even when her vital signs improved, the fight had just begun. Bagenholm woke up paralyzed, and her kidneys and digestive systems failed. She spent two full months in the intensive care unit.

Bagenholm suffered no brain damage. Gilbert thinks the subzero temperatures actually helped. "Her body had time to cool down completely before the heart stopped. Her brain was so cold when the heart stopped that the brain cells needed very little oxygen, so the brain could survive for quite a prolonged time."

But the accident has taken a permanent toll: Nerve damage prevents Bagenholm from having normal use of her hands and that will probably prevent her from finishing her surgical training. She has trouble writing and cooking, and can't rde her mountain bike. But she has returned to skiing and now works part time, doing paperwork and marveling at the medical miracle.

"When you are a patient, you're not thinking you are going to die. You think, I'm going to make it. But as a medical person, I think it's amazing that I'm alive,"she says.