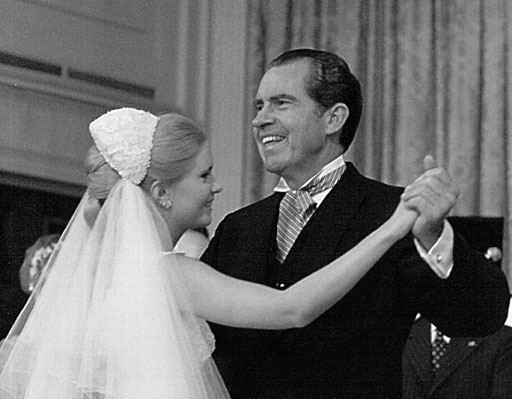 NEW YORK (CBS) Chelsea Clinton has gone from a teenaged first daughter to a bride-to-be, but she's not the only president's little girl to capture the public's attention as she walked down the aisle.

Alice Roosevelt Longworth, the daughter of President Theodore Roosevelt, became an instant celebrity and fashion icon when her father assumed office. She was a White House bride and her husband, Nicholas Longsworth, eventually became the Speaker of the House.

Even after her husband's death, she remained a staple in Washington society, earning the nickname "The Other Washington Monument."

Twenty-two presidential children have been married while their dads were in office, including nine at the White House.

Lynda Bird Johnson, daughter of President Lyndon Johnson, and President Richard Nixon's daughter Tricia were two of the first daughters who married at the White House, each to great fanfare.

Johnson wed Marine Corps Capt. Charles S. Robb. in the East Room on Dec. 9, 1967. Nixon, then 19, married Harvard law student Edward Finch Cox in the Rose garden in a televised 1971 ceremony that Life magazine called "akin to American royalty." Hers is the last wedding of a first daughter to take place at the White House.

Others, like Jenna Bush Hagar, choose to marry away from the presidential residence. She married Henry Hagar May 10, 2008, at the Prairie Chapel Ranch near Crawford, Texas, and is now an author, teacher and "Today" show contributor based in Baltimore.