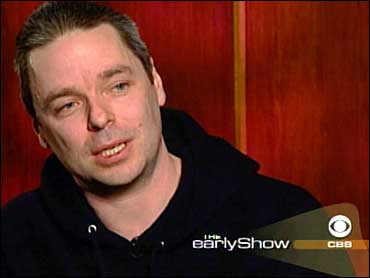 The Early Show series "My New Life" profiles people who have been through profound life changes. Dave Price follows the path of a rock star who has left the spotlight far behind.


After a few years in the fast lane, many rock stars either burn out or fade away. Fame takes its toll, but Stephen Harris was one of the survivors. As a former bass player and guitarist, he performed in big-name bands, including Guns N' Roses, The Four Horsemen and The Cult, who he describes as "a wonderful bunch of chaps. Fine friends of mine."

But with those heady times now in the past, Harris is looking to the future and planning a career change of epic proportions, as Dave Price learned for The Early Show.

Harris was successful in a way most budding musicians can only dream of. But looking back, he knows that his rock career only began because he couldn't seem to do anything else.

He admits that he "did terribly in school, hated it, hated it. Every time I took a test I failed it. Every time a teacher talked I could never grasp what they were saying. I always felt like I was in a wind tunnel trying to read a newspaper and everything was just rushing by."

Harris was bright, but for reasons he couldn't understand, he never seemed to be able learn — so at 16, he flunked out of school. "I did avoid anything that involved reading or writing. I never learned to read music. I learn everything by ear," he said. "There wasn't a problem as far as I was concerned."

On the eve of a big tour, his band broke up, "and then everything fell apart. It literally was one day we were going out on tour and the next there was no band, there was no record, there was nothing and I was living on somebody's couch wondering what I was going to do with the rest of my life."

After a decade of struggle, Harris decided to give school another try, but his old learning problems got in the way. Finally, he looked for help — and found it. "I sat with a woman just in a chair outside her office and I said, 'I think I might have a learning disability.' And she asked me three or four questions."

Harris was sent for testing and, at last, came to understand and overcome his disability. Having finally learned how to learn, he passed the entrance exams for Columbia University and enrolled as a pre-med student.

On campus, a man who once captivated college students from the stage now blends in nearly invisibly and has adopted the student routine. "It's pretty easy, actually," he told Price. "My alarm clock goes off at 5:30. I go to class. I sit in class all day studying. Then I come home, study some more and go to bed. Then my alarm clock goes off and I get up and study."

If he stays on track, the man who once called himself Haggis will someday be known as Dr. Harris. It will be a different world for this rock survivor, and a whole new life — something Harris is ready for. "I'm 39 now. There's a certain amount of dignity. I don't look so good in a pair of tights these days," he said.

If Harris is accepted to medical school, he'll be 45 years old when he graduates. He told Price it's still more than enough time to do some good.

To check out some of the resources that have helped Stephen Harris in his new life, visit these Web sites.