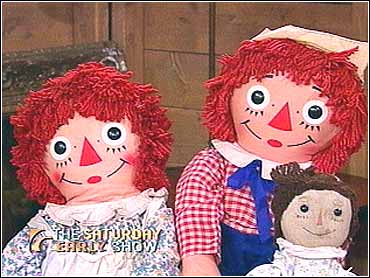 She's 85 years old this year but she looks as young as ever. The Saturday Early Show's Collectibles Expert Tony Hyman says some collectors are taking another look at Raggedy Ann.

The Raggedy Ann character was copyrighted in 1915 by Johnny Gruelle, a commercial artist. Gruelle knew he had a money maker and quickly licensed P.F. Volland to make dolls of Ann and her brother Andy. Today Volland dolls are worth up to $3,000 and can be recognized by a cardboard heart inside you can actually feel.


Volland dolls have long narrow red noses that are outlined in black. Ann has tiny eyebrows and a narrow mouth. Made of cotton, the dolls appear a bit grayish in color. The original Ann and Andys were made with dark hair.

If Ann's legs are multicolored, not red and white-striped, she might have been made in the 1930s by Mollye's Doll Outfitters. For four years, until Gruelle won in court, Mollye's made unauthorized dolls. They can be worth $500 or more.

Gruelle preferred cartooning to dolls. Before his death in 1938 he wrote some Raggedy Ann and Andy books, worth in the range of $50 to a $100 today. It was his grandchildren who began marketing Ann and Andy in earnest.

Hundreds of dolls, figurines, clocks, cookie jars, jewelry, baby goods, records, plates, ornaments, music boxes, clothing, coloring books, comic books and fabrics began to appear on the market. They range in value from 50 cents for pins to $1,000 or more for original art. Most items other than dolls still sell for modest prices.

There was a boom of Raggedy Ann in the 1960s. If your Ann has red hair, she is probably a Knickerbocker doll from that period and worth less than $100.

For additional information about Raggedy Ann Dolls, Hyman recommends Catherine Smith. She can contacted by email at panman@utec.net.

Hyman also recommends long-time collector and dealer Gail Rose for information on Raggedy Ann and Andy collectibles. Rose buys, sells, trades and discusses Ann and Andy dolls and all other Johnny Gruelle collectibles. She can be reached by email at theraggedylady@gailsdollhouse.com.

Or visit her Web site at www.galsdollhouse.com.