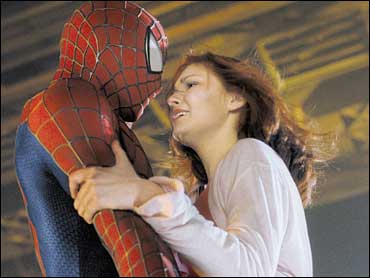 In her latest Political Points commentary, CBS News Senior Political Editor Dotty Lynch takes a look at profiles in courage, real and fictional, old and new, and lessons real politicians would be wise to learn.


Marvel Comics first published Spiderman in 1962 - six years after John Kennedy wrote his Pulitzer Prize winning book, Profiles in Courage. This month, both are back and it's hard to read or see one without thinking about the other.

Truth be told, when I was Peter Parker's age I was so nerdy that I was reading Profiles in Courage and not Spiderman. But the yearning for people of moral courage and heroic nobility was implanted in the minds of many Americans by both of these works and one wonders how much of the disillusionment with people in public life is because we were encouraged to set unrealistic expectations. Are our standards too high? Should only superhuman efforts be rewarded? Should the bar for acknowledging good works in the here and now be lowered? Are politicians only heroes if they lose?

Spiderman is clearly fantasy. The endearing high school nerd takes on superhuman powers after being bitten by a vicious spider. Spidey then does wonderful things for his friends and for his community. And he gets rewarded instantly with the affection of the beautiful girl and the admiration of his peers. His uncle's message that "with great power comes great responsibility" sets forth an ethos that encourages and honors good works.

Profiles In Courage is reality, not fantasy. The heroes are public servants who do their jobs well. Suddenly a moment of crisis occurs and they exhibit raw courage. There's no spider to bite them, just a set of ethical principles to guide them. But, unlike Peter Parker, they rarely get instant external gratification. Often by doing the right thing they lose their jobs and their income and are castigated as naives.

The new edition of JFK's book, Profiles in Courage For Our Time, edited by Caroline Kennedy, tries to encourage noble acts by making up in prestige for what the political system has failed to do. While her father focused mainly on historical heroes, John Quincy Adams, Thomas Hart Benton, Sam Houston and Daniel Webster, Caroline's version honors recent public figures. Respected journalists were recruited to authenticate their courage. However, some of the stories are so fresh and so mired in the adversarial politics and cynicism of our times that the heroism of the acts that are chronicled is still open to question.

Journalist Bob Woodward recounts the story of former President Gerald Ford, who is honored for his pardon of Richard Nixon. Ford - a workman-like Republican leader - was approached by Alexander Haig with a deal that would make him President if he pardoned Nixon. Ford refused or possibly didn't even realize the implications of the offer.

Woodward goes on to say that Ford eventually came to see the merits of a pardon as a tool for healing post-Watergate America. The pardon created an uproar and Ford lost the Presidency two years later to Jimmy Carter. Many Democrats and skeptical journalists are still not convinced that the pardon was a heroic act. But, as time passes, Ford's motives are starting to look less self-serving and more and more noble.

The courage of some others included the book is beyond doubt. John Lewis, the Georgia Congressman who was an early civil rights leader, has certainly earned his place in history, as have the Irish leaders - including John Hume and David Trimble - who compromised entrenched beliefs to try to bring peace to Northern Ireland.

A touching case of political courage is made by Michael Beschloss on behalf of U.S. Representative Carl Elliot of Alabama, who co-authored the National Defense Education Act but lost his Congressional seat and spent his Congressional pension taking on George Wallace. Elliot also lost his circle of friends and found it almost impossible to earn a living because of hostility against him.

The closest the current political/journalistic pack has come to rewarding a public official who takes risks is John McCain. McCain, of course, is a true war hero in addition to being a political maverick. He's also so accessible to reporters that there may be some self-interest involved in all that adulation.

In her interviews to publicize the book, Caroline Kennedy herself exhibited much of the quality of courage, which her father described as "grace under pressure." Her dignity in dealing which some of the personal questions ("Was the day of your brother's death the worst day of your life?" "Tell me how you have exhibited courage in your personal life?") which have become staples of the talk show circuit, showed the kind of steel and refusal to succumb to pressure which her book celebrates.

There is tremendous pressure on modern politicians to give up their privacy, avoid risks, raise gobs of money and get reelected by running slash and burn campaigns. What if we could figure a way to reward the many nerd public figures who do the right thing day after day by guaranteeing they'd get re-elected just by running on the merits? "With great power comes great responsibility" is a good phrase for voters and journalists to keep in mind too.

Maybe Spiderman and Caroline could collaborate on a sequel.

A veteran of the Washington scene, CBS News Senior Political Editor Dotty Lynch provides an inside look at the issues and personalities shaping the political dialogue in the nation's capital and around the country.