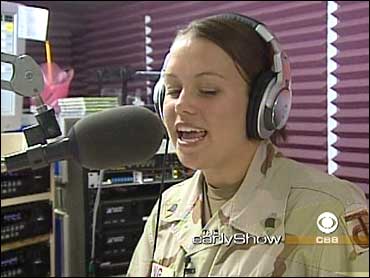 But, reports co-anchor Harry Smith on The Early Show Thursday, Army Specialist Kristen King has the patter and personality to make soldiers far from home feel like they're listening to the girl next door.

She left Louisiana State University and her sorority house to join the Army. Now, after only a month on Armed Forces Radio in the Iraqi capital, King is already one of the troops' favorite disc jockeys.

"In high school," the Shreveport, La. native told Smith, "I was a dancer and a cheerleader, and a sorority girl in college. So, when I picked up and joined the Army, (people said to me), 'Are you crazy?' Never in a million years would I have thought I would be in the Army, much less in Iraq doing a radio show for 100,000-plus troops. So, it's pretty awesome."

King is the midday dj. Her format? Pure country. Her show's name? "The Country Convoy."

But she goes easy on songs about cheatin' hearts.

Smith noted that, "No matter the duty, whether pushin' paper in the (secure) "Green Zone" or stationed in some far-flung province, the fact is if you're in Iraq, you ain't home. And King knows it's her job to help make it all a little easier for the troops."

As King observed, "No matter where you are, music makes you think of home. There are certain songs that everyone can connect to, and every song is connected to a memory. So, when guys call in and wanna hear these songs, it's like giving them a piece of home. So I'm glad that I can do that."

King is building her fan base, and knows exactly what her regular listeners want: "Basically, I'm just hopin' I'm gonna play some good music and entertain 'em. I go through the songs and think about what they request every day. I know I'm gonna have to pull Johnny Paycheck, 'Take This Job and Shove It.' I know I'm gonna have to play that song every single day. There are guys out at Camp Victory working in the motor pool, and I know every single day, they are gonna call and request that song."

King, a journalism major, said she realized most LSU journalism students would have similar resumes when they graduate, so she figured going to Iraq would beef up hers.

She plans to return to school at some point.