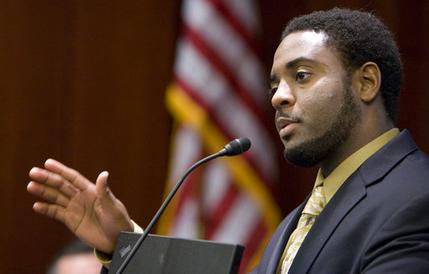 HARTFORD, Conn. -- A convicted felon who graduated from Yale Law School and won acclaim as a poet is being asked by a Connecticut committee to prove his "good moral character" before he is allowed to practice law.

Reginald Dwayne Betts passed the state bar exam in February, but a panel of judges and lawyers that decides who joins the state bar flagged his file because of three felony convictions for a carjacking he committed two decades ago as a teenager.

The Connecticut Bar Examining Committee will investigate and hold a hearing on Betts' bid for admission to the bar. Like most states, Connecticut does not prohibit felons from becoming attorneys, but a felony conviction creates a presumption that the applicant lacks "good moral character and/or fitness to practice law." Such applicants must prove otherwise by "clear and convincing evidence."

A lawyer for Betts, William Dow III, said people from many walks of life who know Betts have indicated they are willing to support him and testify on his behalf if necessary in the Bar Examining Committee proceedings.

"It's an honor to represent this young man," Dow said. "He has a resume that is absolutely breathtaking. He personifies what people talk about when they speak of second chances."

Betts grew up in Suitland, Maryland, near Washington, D.C., and was convicted of a carjacking at a Virginia mall when he was 16. He served eight years in prison. He went on to graduate from the University of Maryland, win a Harvard University fellowship and earn a Yale law degree.

Along the way, he has written two books of poetry that received good reviews from media critics. A third book, "A Question of Freedom: A Memoir of Learning, Survival, and Coming of Age in Prison," won a 2010 NAACP Image Award. He is now married with two children.

Only three states -- Kansas, Mississippi and Texas -- ban felons from becoming lawyers, according to the National Conference of Bar Examiners. Many states have "good moral character" standards similar to those in Connecticut.

The Ohio Supreme Court last year rejected a request to become a lawyer by John Tynes, who served prison time after repeatedly trying to meet girls for sex, but said he could reapply in 2018. Also in Ohio, in the late 1990s, the same court allowed convicted murderer Derek Farmer to become a lawyer, which upset law enforcement officials.

Former Connecticut Judge Anne Dranginis, chairwoman of the Connecticut Bar Examining Committee, said she could not discuss specific cases. She said the panel has approved convicted felons in the past, but it is not a common occurrence.

"It is not an automatic disqualifer," she said of a felony conviction. "There are many times where we see things that happen early in a person's life that cease to be problems for them. What we do see is ... people take responsibility for their past conduct and very often have been rehabilitated."