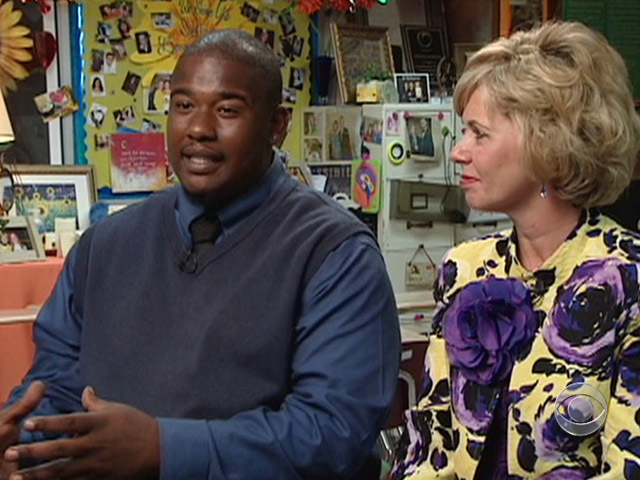 (CBS News) PICAYUNE, Miss. - In Washington Thursday, the John F. Kennedy Center for the Performing Arts honored 10 teachers for their power to inspire. CBS News correspondent Wyatt Andrews spoke to one of them as well as the student whose life she changed.

The first thing to know about Donna Porter, a teacher at Picayune Memorial High School in Mississippi, is that she is relentlessly positive and upbeat.

It is why everyone knew a collision was coming with the student everyone feared.

A gang member on release from reform school, DJ Batiste walked into Mrs. Porter's first day of class two years ago and brazenly asked her to cheat on her husband of 30 years.

"And I looked her up and down from head to toe," recalled Batiste, "folded my arms and said, 'Well, don't you think its time for a change?'"

"As if you are hitting on her?" asked Andrews.

As Porter recollected: "I remember thinking, 'I need to take a deep breath, I've got this.'"

Got this, as in DJ goes to the office? No.

Porter guessed in that split second that DJ was a thug only because he needed to be noticed. So she made him the class greeter. The job of saying hello to every classmate every day was the first positive attention he ever got in school.

"Where would you be now?" asked Andrews.

"In jail or hell," Batiste said.

"In jail or hell?" asked Andrews.

In jail or hell," said Batiste.

DJ stayed in class and graduated on time to cheers. It was DJ who nominated Mrs. Porter for the Kennedy Center teaching award, an award given in the name of Broadway icon Stephen Sondheim.

When we showed Sondheim tape of Donna Porter and DJ Batiste, it brought tears.

"Why did that make you emotional?" Andrews asked Sondheim.

"You watched in action what a teacher can do," he said. "Look at the pride on his face, that joy. I don't think I've been that happy in my life."

Even Porter got tearful. "It's the greatest accomplishment of my life," she said.

When Porter teaches, she told us she is reading her students: watching for who needs help and who's behind. With affection she calls them "lumps of coal," and believes that every one of them -- just like DJ -- could be her next gem.

Donna Porter could be reached at: donnasealporter@gmail.com