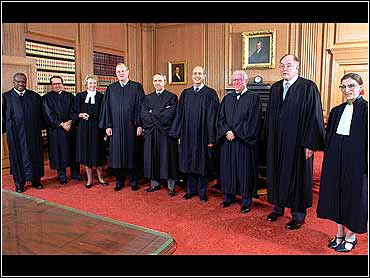 Before they take off early for Thanksgiving break, the Supreme Court will hear oral arguments in five cases this week, which CBSNews.com Legal Consultant Andrew Cohen calls a fairly eclectic mix of issues. They range from how the Coal Industry Retiree Health Benefit Act ought to be interpreted to how far a trial judge must go in asking about a defense attorney's conflict of interest.

On Monday, the Justices will listen to arguments in two cases relating to the criminal justice system. In Mickens v. Taylor, the Court will hear a case out of Virginia in which Walter Mickens, Jr. was convicted and sentenced to death for the 1992 murder of teenager Timothy Hall. As it turned out, Mickens' lawyer during the trial, a fellow named Bryan Saunders, also had represented Hall, the victim, on unrelated charges which were pending at the time of his death. The trial judge had appointed Saunders to represent Hall and then, later, had chosed Saunders to represent Mickens. Mickens didn't know about the double representation; Saunders never mentioned it to anyone; and the judge didn't say anything about it either.

After the trial, Mickens' new attorneys (all capital defendants are given new attorneys during their federal appeal) discovered Saunders' dual role. They argued that Mickens had been denied effective assistance of counsel because Saunders hadn't told him that he was representing the victim at the time of his death.

Sounds reasonable enough to me.

But a federal judge and then the whole 4th U.S. Circuit Court of Appeals ruled that there was no actual conflict of interest between Mickens and his attorney and even if there were it had not affected Saunders' ability to represent his client. The Supreme Court will have the final say.

On Tuesday, the Justices take on another two cases touching upon the criminal justice system. In United States v. Vonn, the Justices will be asked to decide how often during the pre-trial process a defendant must be advised of his right to an attorney at trial. In Alphonso Vonn's case, he was advised of that right first by a federal magistrate during his initial appearance. At his subsequent arraignment, he also was advised by a judge of his right to counsel throughout his case. He even signed a form acknowledging that he understood those rights. But the federal judge who in 1997 accepted Vonn's guilty plea to armed bank robbery apparently forgot to mention that right again to Vonn during the colloquy that always must take place between the defendant and the juge during a plea session. Later, Vonn also pleaded guilty to two other charges and, again, the judge said nothing at the time about his right to counsel at trial. Vonn's public defender said nothing.

When Vonn changed his mind a year later, and tried to withdraw his guilty plea, his request was denied. He appealed and the 9th U.S. Circuit Court of Appeals — the California based federal appeals court which almost always butts heads with the more conservative Supreme Court — ruled that Vonn had indeed been wronged by the omission. The High Court will be asked as part of this appeal to perhaps choose between two very different legal standards governing such appeals.

On Wednesday, the Court will take a break from criminal law and focus upon two civil statutes. First, the Court will look at the case of a Kentucky woman who sued Toyota under the Americans with Disabilities Act, arguing that she became disabled after three months of using vibrating tools. She contends that the company failed to reasonably accommodate her disability. Toyota contends that it tried to accommodate her but that she doesn't warrant protection under the ADA because she is only partially impaired. This will be the second ADA case of the Court's just-begun term.

Finally, on Wednesday, the Court will hear arguments in a case that means an awful lot to a few and very little to most. The Justices will decide how far the Coal Industry Retiree Health Benefit Act goes in protecting beneficiaries even at the expense of successor companies.