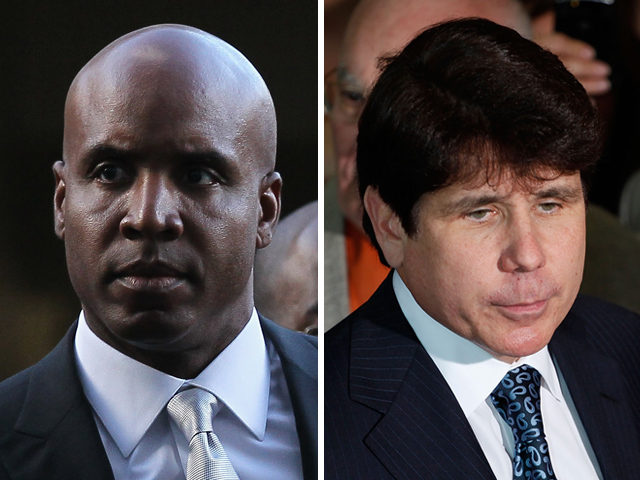 CHICAGO - When anonymous jurors begin hearing the perjury trial of retired baseball slugger Barry Bonds this week, they can credit their privacy in part to a case involving another famous defendant, but one where the focus is on alleged political corruption rather than steroids: Illinois' impeached former governor, Rod Blagojevich.

In the Bonds case, Judge Susan Illston alluded to the media crush surrounding Blagojevich's trial when she ruled that she would keep the jurors' names secret until after their verdict on whether the homerun king lied to a grand jury about taking performance-enhancing drugs. Illston, in San Francisco, cited the decision by federal Judge James Zagel in Chicago last year to withhold the names of the Blagojevich jurors to protect them from media "harassment."

The decisions rekindle a dilemma that nags high-profile cases in an era of ever-intensifying media competition: How should judges balance jurors' right to privacy with the public's right to know more about those who sit in judgment in such closely watched trials?

On one side are those who say judges must shield juries from media excesses to ensure that evidence is assessed without bias, distraction or fear of publicity. Others argue the balance has shifted too far in jurors' favor, eroding a core American principle of making sure that trials are as open as possible.

"The founding fathers would have frowned at the idea of keeping jurors' names secret," said James Oldham, a law history professor at Georgetown University. "And they would have been completely astonished at the intensity of the issue today."

Zagel, who also will preside over the April retrial of Blagojevich on charges that he tried to sell or trade President Barack Obama's vacated Senate seat, recently described the media as "rapacious" and said he'd keep jurors' names secret again, this time until a day after the trial.

In ruling that she'd also keep jurors' identities from the press until the Bonds proceedings end, Illston quoted Zagel's ruling that "jurors summoned from the community to serve as participants in our democratic system of justice are entitled to safety, privacy and protection against harassment."

The quandary is relatively new. Until the 1970s, anonymous juries were virtually unheard of. Even at trials of mobsters such as Al Capone, everyone would have known the jurors' names, Oldham said.

The architects of the U.S. justice system, argued Jeff Ifrah, a former federal prosecutor now in private practice in Washington, D.C., believed transparency was essential to defendants' right to a trial by their peers.

"Knowing the names of the jurors is part of the constitutional right to a public trial. You always err on the side of the public," Ifrah said. "A jury doesn't have the right to the protection of their names. There just isn't a legal basis."

Proponents of making juror names public point to the 1987 racketeering trial of New York mob boss John Gotti. The anonymity of jurors, they argue, made it possible for a friend of a Gotti associate to be empaneled undetected and offered a bribe. Gotti was acquitted, but was tried again in 1992 and convicted.

Because juror names were known during the 2006 corruption trial of another former Illinois governor, George Ryan, journalists discovered two panelists had omitted encounters with police from their questionnaires. That prompted a judge to kick them both off the jury.

"Jurors can engage in improprieties when not subject to public scrutiny," Chicago-based attorney Christopher Keleher argued in writing about the issue in a 2010 edition of the University of San Francisco Law Review.

Debate over Zagel's Chicago jury decision boiled down to a collision of early courtroom ideals with the advent of ubiquitous Internet communication and an aggressive, modern-day media — as jurors in Blagojevich's first corruption trial learned.

Already exhausted by the 2 1/2 month trial, they faced a media onslaught afterward. Its intensity only increased after word got out that a lone juror had kept the panel from convicting Blagojevich of the most serious charge — seeking to profit from naming a replacement to Obama's seat.

The phone rang nonstop at jury foreman James Matsumoto's house. A helicopter hovered over another juror's residence. The holdout juror, upset and unsettled, went into hiding as journalists camped outside her townhome.

Zagel had refused media requests to release jurors' names while the case was still being argued, saying Blagojevich fans or detractors could reach jurors through what he called the "astounding" proliferation of email and social networking sites.

More recently, he rejected a media request for him to release jurors' names immediately after the April retrial — as he did after the first trial. Instead, he said he would delay their release longer, until the next day.

Zagel cited a memo from the U.S. Marshals Service saying the holdout juror "was scared, uncomfortable, and felt harassed by the media." One tenacious reporter kept rapping at another juror's door requesting an interview, telling her "it was their job ... to knock every 15 minutes, whether she answered the door or not."

Bemoaned Zagel: "Some reporters will disregard ordinary rights a citizen has to get a story."

"There's a growing concern jurors ought not to have, as an extra burden of service, the sorts of discomforts that may come with intense press scrutiny," he said.

But while there's wide agreement that anonymous juries can be justified in rare mob or terrorist trials, Keleher says "if courts delved deeper into the implications of anonymity, they might be less inclined to use it."

The few studies to examine the subject, for example, suggest juries are slightly more prone to convict when their identities aren't known, according to Keleher.

Matsumoto now believes he and his fellow jurors in the first Blagojevich trial made a crucial mistake in not talking to the media immediately afterward.

Minutes after they were dismissed, they evaded the media by exiting through a courthouse tunnel. Zagel had provided a room for them to meet with the media, Matsumoto said, but didn't advise jurors whether they should do so. At the retrial, he thinks Zagel should tell jurors to meet journalists right away.

"It would have diminished the media frenzy," Matsumoto said. "By delaying, you are just whetting the media's appetite."