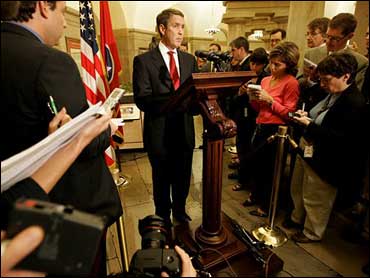 This column was written by Terence Samuel.

Anyone who thinks that Bill Frist's presidential prospects have been extinguished by a few questions about a rancid-looking little stock sale that may or may not be insider trading is either blissfully naive or a confirmed amnesiac. Bill Clinton, remember, got to be president even with the Gennifer Flowers tape hanging around his neck, and George W. Bush survived questions about a drunken-driving arrest and whether he was AWOL from the National Guard.

So Frist sold high just before the stock went low, and there is some suggestion that he got regular updates on what was in his "blind trusts." He may have been just living by the Reagan-era doctrine of "trust but verify."

For most Americans, adultery and driving after you've had a snoutful are more accessible demerits than the convoluted rules about blind trusts and the strictures against profiting from privileged information. So I say we have to assume that the direct damage to the senator's presidential chances, whatever they were to begin with, is going to be minimal.

I say all that to say this: Frist is now learning, early, how withering the scrutiny of a presidential campaign can be, and how easy it is to lose control of your message and your image. By his own admission, the stock sale was supposed to be an early strategic positioning for his 2008 run. "Looking ahead at my final years in the Senate and what might come next," says Frist, "I have for some time wanted to eliminate even the possibility of an appearance of a conflict by totally divesting."

And divest he did; total divestment that, for the moment, has turned into a total disaster — a tactical maneuver that has backfired. Frist sold the stock from several of his blind trusts about two weeks before the Hospital Corporation of America (HCA), the Tennessee-based company started by his family, announced that it expected a drop in future earnings. That bad news caused the stock to drop more than 15 percent in price, so those two weeks saved Frist millions of dollars. The tale is further complicated by the fact that other top HCA executives were also dumping shares at the same time to the tune of $112 million. The Securities and Exchange Commission (SEC) has thus decided to investigate, and has subpoenaed HCA documents in the case.

Surely this is not how one would typically ramp up for a presidential run. But, depending on how he handles the heat, this trial could be more of a blessing than a curse for Frist. That's because whomever he runs against in the GOP primary will likely face some crisis of his or her own, and having survived an early test could afford the majority leader some advantage. That's the good news.

The bad news is Tom DeLay.

In looking at "what might come next," Frist probably envisioned himself riding into the GOP convention three summers from now with a vibrant, attractive, wholesome running mate at his side; together they would make the country swoon. And that may still happen, because some dreams do come true.

But for the next few months, Democrats are going to do their best to make sure that voters think the GOP ticket in 2008 is made up of the two majority leaders — one under federal investigation for stock fraud, the other under criminal indictment for campaign conspiracy. Don't be surprised by placards proclaiming "Frist-DeLay '08." Democrats have been chafing under DeLay's heavy hand for almost a decade and have been coveting his political scalp for just as long. But last year, when a series of ethics questions forced him back on his heels, Democrats began using his taint against Republicans. They began talking about a "culture of corruption" that had infected the GOP leadership in the Congress and the White House. It was mostly a question of trying to shackle the beleaguered DeLay to GOP leaders, particularly Bush, who was having his own problems with Iraq and with the Valerie Plame investigation. And while there was little to suggest that the effort was having much effect, the Dems stuck with it, because it sure wasn't hurting them.

Then came Hurricane Katrina, which seems to have harpooned the president and his administration after their poor performance in the aftermath. And before Republicans could recover from that debacle came word of the Frist investigation. So when Texas prosecutors announced the DeLay indictment this week, it was, for Democrats, the perfect storm. "This is a bonanza for the Democrats," commentator Stuart Rothenberg told CNN.

An almost gleeful Howard Dean, meanwhile, declared: "With … Tom DeLay under criminal indictment, Senate Republican Leader Frist facing SEC and Department of Justice investigations, and White House Deputy Chief of Staff Karl Rove under investigation, the Republican leadership in Washington is now spending more time answering questions about ethical misconduct than doing the people's business." Frist can be sure that there is more where that came from.

Meanwhile, he may yet survive insider-trading questions. The question is whether he can survive Tom DeLay.

Terence Samuel is the chief congressional correspondent for U.S. News & World Report. His column about politics appears each week in the Prospect's online edition.