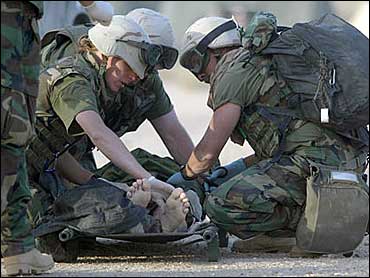 The worst "friendly fire" incident of the Iraq war was triggered by a Marine air controller who mistakenly cleared Air Force attack planes to shoot at U.S. positions, killing as many as 10 Marines, officials said Monday.

The incident happened March 23, 2003, on the fourth day of the war, near the city of Nasiriyah in southern Iraq amid a chaotic battle with Iraqi forces in which a total of 18 Marines were killed.

U.S. Central Command, which investigated the matter, said it planned to publicly release its final report after the last of the Marine families involved had been briefed on it Monday. The investigation's findings were first reported Sunday by the Los Angeles Times and the Baltimore Sun.

Officials who spoke on condition of anonymity Monday said the investigators could not determine with complete certainty how many of the 18 Marines were killed by gunfire and missiles launched by the Air Force A-10 aircraft. They said the number was as high as 10. The others were killed by enemy fire; some were hit by friendly as well as enemy fire.

The Marines who were attacked had taken control of a bridge on the northern edge of Nasiriyah — a mission that was key to opening an attack route for the main body of Marines driving toward Baghdad. It was during the same battle that Pfc. Jessica Lynch and several colleagues were taken prisoner.

A Marine forward air controller who was southeast of the bridge cleared two A-10 attack planes to fire on vehicles north of the bridge, not realizing they were American vehicles, according to the Times, which cited a separate Air Force report that was included in the Central Command investigation.

The Times quoted the father of one of the Marines who died in the incident as saying he was told that film from the gun cameras aboard the A-10 planes no longer existed because it had accidentally been recorded over.

The Sun reported that the investigative board found that the Marine air controller did not act with "negligence or reckless disregard," but out of "what he perceived to be in the best interest of saving lives of his fellow Marines." It recommended him for unspecified administrative or disciplinary action.

According to the Pentagon, about 17 percent of Americans killed or wounded in the 1991 Gulf War were hit by friendly fire. Army scholars have estimated the friendly fire rate in World War II, Korea and Vietnam to have been about 2 percent, but that could be an undercount.

On the day after the incident in Nasiriyah, Gen. Tommy Franks, the war commander, said friendly fire casualties were "not beyond my expectation."

"That doesn't mean that in command of an organization like this we like it. What it means is that we understand in the nature of war that we're going to find ourselves in circumstances where, because of a tactic or a technique or perhaps a weapon system, maybe because someone's tired … we will have these blue on blue, or friendly fire incidents," Franks said.

"We've seen them. And our subordinate commanders work very hard to avoid that. But I suspect in the days ahead that we'll probably see more," he said.

Other suspected friendly fire incidents during the 2003 war included a F-15 strike that may have killed three GIs and wounded five and a Marine killed by friendly forces on April 3.