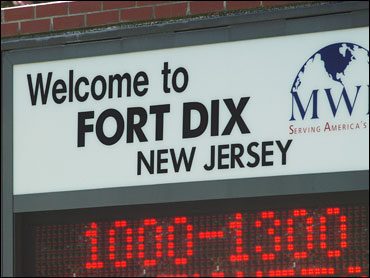 One of the six Muslim men suspected of plotting to massacre U.S. soldiers at Fort Dix had bomb recipes in his car and referred to Osama bin Laden as "Uncle Benny," a former co-worker said Thursday.

"He also, at times, would say things that you would think that, 'This guy can't be all there,' but I dismissed them as jokes," the former co-worker, Bob Watts, told ABC's "Good Morning America."

Watts said he and Agron Abdullahu worked together at bakery for more than two years and were "like brothers."

"He was an easygoing guy, made you laugh all the time, he was somebody you really enjoyed working with," Watts said.

Abdullahu sometimes made jokes about how the United States couldn't find bin Laden, saying, "U.S., no matter what they do, cannot catch my Uncle Benny," Watts said. He said Abdullahu also showed him bomb recipes that he had in his car.

He said he warned Abdullahu, "you have to watch yourself this day and age, with 9/11, you're going to get yourself into a lot trouble." But Watts said he never saw anything to indicate that his friend hated the country.

Federal authorities said they detained Abdullahu and the other five men because they feared the group was on the verge of carrying out an attack on Fort Dix. The men were arrested Monday night as they tried to buy AK-47 assault weapons, M-16s and other weapons from an FBI informant, authorities said.

"They had training, they had maps, and I think they were very close to moving on this," U.S. Attorney Christopher Christie said Wednesday. "Our view was they had pretty much gotten to concluding the planning phase of this and were looking to obtain heavy weaponry — and if not from us, they were going to try to obtain it elsewhere."

The men — four born in the former Yugoslavia, one from Jordan and one from Turkey — lived in Philadelphia and its suburbs with their immediate and extended families. Three were roofers, one drove a cab, and the two others worked at food stores.

One of the six used his pizza delivery job to gain access to the Army base and scout it out, exposing what may be a security vulnerability, a congressman said Wednesday.

Serdar Tatar was on the fort's approved list of delivery people and given access to the base as part of his job with a nearby pizzeria run by his father, according to a Fort Dix spokeswoman.

Tatar's father, Muslim Tatar, 54, denied that his son had made deliveries to Fort Dix. However, Christie said the younger Tatar spoke of delivering pizzas on tapes made by informants.

Abdullahu was familiar with the base because it was the first place he landed when arriving in the United States as a refugee from Kosovo, according to a law enforcement officials who spoke to The Associated Press on condition of anonymity.

The United States allowed thousands of refugees into the United States after it intervened in the 1998-99 Kosovo war. Abdullahu arrived at Fort Dix as a teenager in 1999 as part of a group of about 4,400 refugees from Kosovo, officials said.

The six — Tatar, 23; Abdullahu, 24; Mohamad Ibrahim Shnewer, 22; Dritan "Anthony" or "Tony" Duka, 28; Shain Duka, 26; and Eljvir "Elvis" Duka, 23 — appeared in federal court Tuesday in Camden and were ordered held without bail for a hearing Friday. Three were in the United States illegally; two had green cards allowing them to stay in the country permanently; and one is a U.S. citizen.

The investigation began more than a year ago after a New Jersey store clerk was asked to transfer a videotape onto a DVD. The tape showed 10 men shooting weapons at a firing range and calling for jihad, prosecutors said. The 10 included the six men under arrest, authorities said.

Christie would not comment on the identities of the four other men in the video or say whether they were considered suspects. But he said the investigation was still going on.

U.S. Rep. Chris Smith, whose district includes Fort Dix, said he has long been concerned about who has access to the sprawling 31,000-acre Army installation located in the Pinelands region of New Jersey, about 20 miles east of Philadelphia.

"This whole affair just underscores the vulnerability," Smith said. "You don't know who's on your base. What the pizza delivery man tells me is that when you have access, when you have frequent access, you get the lay of the land, so that if you do a terror attack it will cause that much more damage and loss of life."

The fort considers its policy for screening delivery people adequate for now, but said it could be reviewed in the future, base spokeswoman Carolee Nesbit said.

Before they are cleared to make deliveries at Fort Dix, drivers must register in advance, undergo a criminal background check, and obtain an access pass that has to be reviewed every 30 days.

Drivers who arrive at the military installation's gate are greeted by armed guards, who check their identification and issue a pass. The delivery people are not followed or monitored once they clear security, Nesbit said.

"There are 16,000 people that come through the gates every day," she said. "It's practically impossible to follow everyone."

Nisbet said security is present wherever military personnel are gathered at the fort, even if it is not visible from the road. In addition to the weapons each individual soldier may carry, she said, "There is security on these ranges."