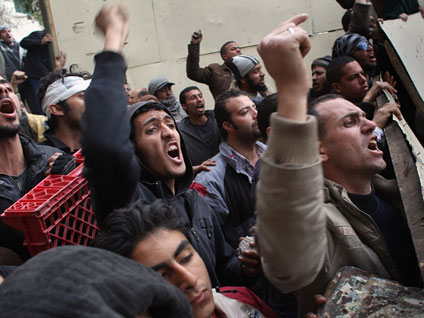 For 10 days, violent protests have engulfed Egypt, calling for the resignation of embattled president Hosni Mubarak, killing at least eight and wounding hundreds as increasing lawlessness, looting and arson continues. Friday will be the moment of truth for both sides as pro-democracy protesters have called for all Egyptians to descend on Mubarak's palace in Heliopolis, the People's Assembly and the television building that afternoon.

Dissatisfied with Mubarak's Feb. 1 announcement that he will remain in power until elections are held in Sept., protesters have given Mubarak until Fri. to leave office, declaring Feb. 4 the "Friday of Departure", where they will march to Mubarak's palace in a last-ditch attempt to force the president out of office.

NewscastMedia.com reports that the Egyptian army has taken sides with the protesters, and will allow them to demonstrate, while opposition leader Mohamed ElBaradei made Fri. an unofficial deadline for Mubarak to step down.

"They hope that this will end today or Friday at the latest, and they called the coming Friday 'the Friday of Departure', but I hope that President Mubarak will take heed before then and leave the country after 30 years of rule and give the people a chance, and I don't expect that he wants to see more blood," ElBaradei told al-Arabiya TV on Feb. 1.

Mubarak told ABC News' Christiane Amanpour that while he's fed up with being Egypt's president right now and would like to step down, he cannot because he fears the country would sink into chaos.

Will "Friday of Departure" mark the climax of 10 days of protests, resulting in Mubarak's ouster, or will it simply be another day in the dangerous drawn-out battle between the people of Egypt and their president? Until Mubarak steps down, the anti-government protesters don't plan on backing down either.