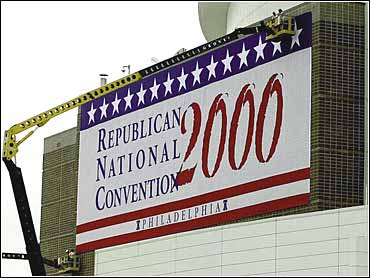 This year, the emotion and machinery of the GOP convention will be more scripted than ever. (Democrats too, but their turn comes later.)

There hasn't been a Republican convention whose outcome was even vaguely in doubt since 1976, and since then, even the side dramas have gradually been squeezed from the process, which today has become more canned than a serving of Dinty Moore beef stew.

Not even John McCain will escape the long horns of Dubya's Lone Star handlers in Philadelphia. The text of the Straight Talk Express's convention speech is being vetted and pre-approved by the Bush campaign team.

Not to be cynical, but the big show in Philadelphia is so scripted, it will make a Kabuki dance look like a bar brawl.

To be sure, it was not always thus. And one doesn't have to go back very far, in the grand scheme of things, to arrive at a time when conventions were battles royale.

Exhibit A: Roiling, ironic turmoil!: Back in 1880, when Republicans were liberals, James A. Garfield wanted his ally John Sherman nominated, but couldn't come up with enough floor votes. Garfield, who did not want the nomination, wound up the dark horse nominee himself and won the White House. He was shot to death a year later. For his part, Sherman later penned the eponymous, and still-important, Sherman Antitrust Act.

Exhibit B: Honorific intrigue! Just four short years later, in 1884, Sherman's brother, Gen. William Tecumseh Sherman, told fellow Republicans: "If nominated, I will not run. If elected, I will not serve."

Exhibit C: Dwight D.'s Chicago Putsch!: Eisenhower vs. Robert Taft in 1952. Remember? Taft, son of former President William Howard Taft, was nicknamed "Mr. Republican," and had every reason to expect his party's nomination. He even had a few delegates pledged before the convention. Eisenhower, a war hero whose star power dwarfed that of modern-day warriors like Gen. Colin Powell, hadn't even chosen a political party until earlier that year. But when Ike became a Republican, it was curtains for Taft the younger.

Bryan says that, "In the 1940s and 1950s … one never knew what the hell was going to happen." And things went along in this happy state of entropy until - (coincidence?) - the full bloom of the television age in the mid-1960's.

There has little in the way of convention fireworks since. In 1964, after the small screen had solidified its grip over the American consciousness (and long after Republicans stopped being liberals), Barry Goldwater took the floor in San Francisco and uttered his infamous line, "extremism in the defense of liberty is no vice and ... moderation in the pursuit of justice is no virtue."> But Goldwater already had the delegates pledged, and the outcome of the convention was not in doubt.

About the only thing we've had even closely resembling a burp in the last ten years was then-Republican Pat Buchanan's Houston tirade in 1992. Something about machine-gunning all the welfare queens, wasn't it? Anyway, Pat didn't stand a snowball's chance in hell of winning the nomination.

This convention-floor progression, from chaos to order, may signal some larger force at work inside the nation's political parties. It may, for example, mean that the big two are being run more like the corporations whose influence on party politics is so often lamented. Or it may signal their impending demise; after all, don't political movements require passion? And doesn't passion require some freedom of expression?

Okay, there's still hope for a few unscripted moments in the Fightin' City of Philly next week. Maybe a fist fight will erupt over an overcooked $50 Aramark cheeseburger. Or maybe a Shadow Conventioneer will - (gasp!) - hold up a cheeky sign for the network people.

"I think both parties are treating this as a media event rather than a political event," says Bryan, in what could be the season's understatement.

Note to McCain: You're one of the few planned speakers with the chops to go off script. Make it count man!