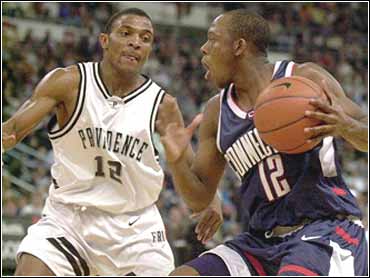 It might be time to stop using surprising when talking about Providence.

The Friars matched last season's win total with their most impressive one of this season, an 81-68 victory over No. 13 Connecticut on Saturday.

They were 9-3 when Big East play started and lost the league opener on the road at Seton Hall, 87-80. Then came a 76-67 win at Villanova and the Friars followed it by snapping a five-game losing streak to the Huskies as John Linehan scored a career-high 19 points.

"I told our guys before the game that this is why you come to play in the Big East. You have to leave it all on the floor and they did," Providence coach Tim Welsh said. "This was an old-time Big East war."

And it was won by one of the new kids on the conference block. As No. 12 Georgetown and No. 24 Boston College have garnered most of the attention as the surprise teams in the Big East, the Friars (11-4, 2-1) have just kept playing defense and winning.

"It is a good win for us especially with the team we had last year," Linehan said, referring to the team that went 11-19 and then was devastated during the offseason when three players were expelled from school and a fourth placed on probation for involvement in an off-campus fight.

"I said it before and I'll say it again, the team that surprises me most is Providence," Connecticut coach Jim Calhoun said. "They outhustled us, they outwilled us. This game was not won on talent."

Providence kept the Huskies (13-3, 2-2) at bay the rest of the way, never letting them closer than nine points.

"The first five miutes of the second half were the key," Welsh said. "We came out and extended a two-point lead to 10 and then the guys said `We're not going to lose this game.'"

The Friars started both halves hot from 3-point range, hitting four in the opening 4:45 as they took a 14-5 lead, and they made three in run to start the second half, two by Mills and one by Linehan.

Connecticut got within 65-56 on a three-point play by Taliek Brown, but Linehan made two free throws to start a 4-0 run.

The Huskies missed a chance to get within a couple of 3-pointers as they went 1-for-2 on three consecutive trips to the free throw line as Providence failed to score on two trips down court. Caron Butler's free throw with 2:25 left had the Huskies within 71-62, but Mills hit a foul line jumper with two seconds left on the shot clock and then Linehan made two free throws with 1:39 left for a 75-62 lead and the celebration among the crowd of 12,409 in the Providence Civic Center was on.

"You get tired of going into other places and having 13,000 fans screaming at you," said Providence center Karim Shabazz, who had 12 points, seven rebounds, six assists and three blocked shots. "We need that type of crowd night after night. We need that energy and enthusiasm."

Providence doesn't need much more energy than that of Linehan, a 5-foot-9 junior, especially on the defensive end.

"Linehan did a terrific job of taking our freshman point guard out of the game," Calhoun said. "It was the same at the start of both halves they came out with energy and we didn't match their intensity level either time."

Maxey also had 12 points for Providence, which hit nine of its first 14 3-point attempts before finishing 9-for-19.

Albert Mouring had 19 points for the Huskies, who committed 21 turnovers, while Edmund Saunders added 18. Brown, Connecticut's freshman point guard, finished with eight points and seven assists, but had eight turnovers.

"He's a great point guard and I just tried to stay close to him and pressure him as much as I could," Linehan said of Brown.

Linehan's importance to the team can't be underplayed. Three of the Friars' losses came when he was out of the lineup after straining a hamstring in the season-opener.

"I still have nightmares of him getting hurt again," Welsh said.