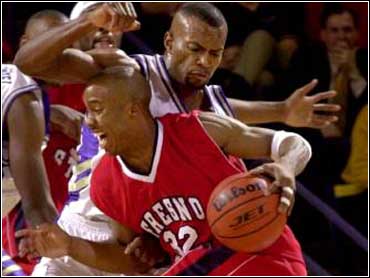 Jerry Tarkanian and the Fresno State Bulldogs once again found a way to stop No. 12 Tulsa.

"We went to the zone and took a chance and it worked," the Fresno State coach said after the Bulldogs beat the Golden Hurricane 73-72 on Thursday night. "It's not great strategy. It just worked out that time."

"That was kind of my patent shot. It felt good. Fortunately, it went in," said Alexander, who scored 25 points right at his nation-leading average of 25.2 points.

Tulsa had a chance at the buzzer, but Eric Coley failed to tip the ball in as it rolled around the rim on a Greg Harrington's missed shot.

"Eric had the tip-in and I don't know how it didn't go in," Tulsa coach Bill Self said.

Last month, the Hurricane lost 75-73 last in Fresno. The only other team Tulsa has lost to is cross-town rival Oral Roberts.

"Down the stretch, we played out of character," Self said.

David Shelton led Tulsa with 17 points, Greg Harrington added 16 and Tony Heard had 14, including 4-of-6 from the 3-point line.

For the Bulldogs, Melvin Ely had 14 points, while Terrance Roberson and Demetrius Porter each had 11.

Fresno State came back after trailing the entire first half when Travis DeManby made two free throws to start an 11-0 run that tied it at 62 with 5:48 remaining.

Tony Heard returned with a 3-pointer that started a 7-0 Hurricane run to make it 69-62 with less than four minutes left.

A basket by Alexander and a 3-pointer by Porter brought Fresno Stae within one point with 58.9 left. Harrington turned over the ball at 45.3 seconds, setting up Alexander's game-winner.

The Hurricane started the game with four 3-pointers in four minutes, including three by Heard, and had a 37-30 lead at halftime.

In the beginning of the second half, Tulsa made three straight 3-pointers, including two by Hill before Fresno slowly came back.

"When we had control of the game, we did so many silly things to let them stay in the game," Self said. "We tried to nurse the lead instead of build on it."