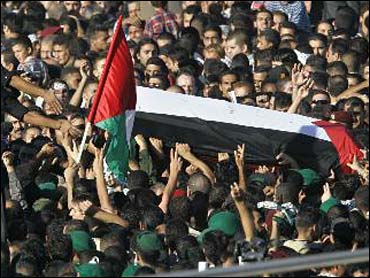 Yasser Arafat was buried Friday in the West Bank headquarters where he had been held a virtual prisoner.

Looking on were tens of thousands of emotional mourners who had swarmed a Jordanian military helicopter that brought the Palestinian leader from a state funeral in Egypt.

Officials tried for 25 minutes to open the helicopter door to remove the coffin onto a jeep that had plowed through the crowd to clear a path.

CBS News Correspondent David Hawkins described it as "complete pandemonium" when the helicopter carrying Arafat's body landed in the Ramallah compound. "Thousands and thousands of the people here rushed the helicopter, crowded around it, the security cordon completely collapsed, as people just pressed the helicopter, trying to get a close look at Yasser Arafat's coffin."

"In the end they were unable to do so, because Arafat had to be buried before sundown, so he arrived here, his casket was removed from the helicopter, and then he was quickly buried," added CBS News Correspondent Cami McCormick.

As the coffin was carried toward the gravesite, police jumped on top of it, waved their arms and flashed the victory sign. People chanted, "With our blood and our soul we will redeem you Yasser Arafat!"

"President Arafat would have wanted it this way, with exhilaration, feelings of loyalty, pain, sadness and love all at once," Palestinian legislator Hanan Ashrawi told The Associated Press. "The people reclaimed him. They wanted to say goodbye without distance."

Under the crush of screaming mourners, plans were hastily scrapped for a stately ceremony with Palestinian officials filing past his coffin.

"It is not what we expected," said Palestinian Cabinet minister Saeb Erekat, who traveled in the Egyptian military helicopter with Arafat's coffin. "At the same time, we had to do the burial before sunset in Islamic tradition. ... I expected much better, more organized, but things got out of hand, unfortunately."

The red, white, green and black flag was ripped off the casket as it was carried through the crowd.

"It's the grief for a leader, the only leader that many, many, many Palestinians have ever known," said CBS News Middle East Consultant Fouad Ajami. "It's an overwhelmingly young population, and Yasser Arafat has been around for nearly four decades. He's been Mr. Palestine.

In its most direct public message to the Palestinians since the death of Yasser Arafat, reports CBS News Correspondent Peter Maer, the White House Friday said, "there's real opportunity for a Palestinian leadership to step forward that is committed to fighting terrorism and building democratic institutions necessary for a Palestinian state to emerge."

Hours earlier, in Egypt, kings, presidents and government ministers from more than 40 countries attended a simple military ceremony for Arafat in a funeral worthy of a head of state, reports CBS News Correspondent Elaine Cobbe. Then, they walked behind the horse-drawn gun carriage that carried the coffin from the mosque to the nearby military airfield.

A leading Jordanian neurologist who regularly examined Yasser Arafat said on Friday that poisoning was the "highest" probable cause of the Palestinian leader's mysterious death and urged that an autopsy be performed.

"One of the causes of platelet deficiency is poison," said Dr. Ashraf al-Kurdi, who examined a gravely ill Arafat in Rammallah two weeks ago.

Israelis watched the huge crowds at the funeral adoring the man they saw as an arch terrorist with reservations, reports CBS News Correspondent Robert Berger.

"There's no evidence that any of these people has stepped beyond it to really, really be interested in sincere peace," said one Israeli woman.

Finally, he's going to his just deserts," said another.

But there's also relief in Israel that the Arafat era is over.

Israeli police before the burial scuffled with hundreds of Palestinian youths who were barred from attending Friday prayers at the Mosque of Al Aksa, a hotly-disputed Jerusalem holy site. The police used stun grenades to disperse crowds of stone-throwers at other locations.

Doors and shutters of homes along the funeral route in Cairo were closed, and the street was cut off to the public. The funeral service itself was held at a military mosque, where dignitaries were present but the public was not, due to security restrictions.

"He has served his people all his life, until he faced his God, with courage and honesty. Let us pray for his soul," said the Grand Sheik of Al-Azhar Mohammed Sayed Tantawi, as world leaders and others stood quietly nearby.

After a traditional funeral prayer lasting only a couple of minutes, eight dark-suited pallbearers carried the casket out of the mosque and handed it to an Egyptian honor guard. They placed it inside a silver hearse and drove away from the mosque, where it was loaded into a horse-drawn carriage for a procession through the streets.

Among those at the Cairo ceremony was Terje Roed-Larsen, U.N. envoy and a key player in the 1993 Mideast peace talks in Oslo.

"Arafat," said the U.N. envoy, "was more important for Palestinian identity than their flag and their national anthem."

Roed-Larson also expressed the hope that the new Palestinian leadership will return to peace negotiations with Israel.