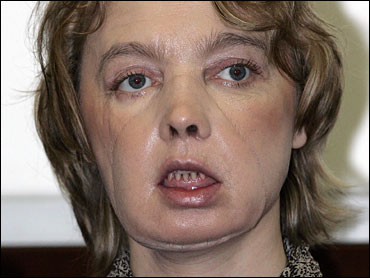 PARIS Isabelle Dinoire, a Frenchwoman who received the world’s first partial face transplant, has died 11 years after the surgery that set the stage for dozens of other transplants worldwide. She was 49.

The Amiens University Hospital in northern France said in a statement Tuesday that Dinoire died in April after a long illness. The hospital didn’t release any further details and it wasn’t clear if her illness was related to the transplant.

Her family wanted her death kept private. But the hospital went public with the death after the French newspaper Le Figaro reported on it.

After being severely disfigured by her pet Labrador, Dinoire was given a new nose, chin and lips in a ground-breaking, 15-hour operation in 2005 led by doctors Bernard Devauchelle and Jean-Michel Dubernard in the Amiens hospital. When she first appeared in public with her new face four months later, her speech was slurred and a scar clearly visible -- but the fact that she could speak to reporters of having a “face like everyone else” and almost smile was seen as a medical breakthrough.

The operation changed Dinoire’s life and drew international attention. There have been nearly 40 face transplant​ surgeries around the world since 2005.

However, medications that patients must take to prevent their bodies from rejecting the new organs can cause other illnesses and have severe side effects. Le Figaro, which first reported Dinoire’s death Tuesday, said she had suffered two cancers linked to the transplant and lost partial use of her transplanted lips last year.

Dinoire, a divorced mother of two teenage daughters, said she was wrestling with personal problems at the time of the 2005 dog attack and “took some drugs to forget.” She said she was passed out when the dog bit her.

Disabled by her disfigurement, she welcomed the opportunity for a transplant from a brain-dead woman. Her doctors said they repeatedly warned her of the risks involved.

Her operation was “an unquestionable surgical success” and the medical community learned from her experience, said Dr. Jean-Paul Meningaud, who heads the reconstructive surgery department at the Henri Mondor Hospital south of Paris and wasn’t involved in treating Dinoire.

But Meningaud, who has been involved in seven of France’s 10 face transplants, is now arguing for suspending the procedures so that the medical community can take stock of whether the long-term benefits are worth the physical and psychological toll they take on patients.

In Dinoire’s case, “The results were very good in the medium term, but the long-term results were not so good,” Meningaud said.

He said that face transplant recipients are having more difficulty with anti-rejection medication than doctors initially predicted, and are requiring more follow-up surgery.

“It’s a rather high price to pay for the patient. It’s time to mark a pause,” he said.

Her immune system nearly rejected the transplant twice. A year later, doctors said she was gaining more and more sensitivity and facial mobility, and she got herself a new dog.

“I can open my mouth and eat. I feel my lips, my nose and my mouth,” Dinoire said at a news conference in 2006.

“I have a face like everyone else,” she said. “A door to the future is opening.”

The procedure Dinoire received set the precedent for countless other facial transplants, including Mississippi firefighter Pat Hardison’s procedure, which has been called the “most extensive” face transplant​ ever. In 2001, when Hardison was 27, the roof of a burning house collapsed on top of him, leaving his face severely disfigured.

In August of 2015, doctors at New York University’s Langone Medical Center transplanted the face and scalp from a deceased donor onto Hardison’s head. The surgery, which was the first to include a scalp and functioning eyelids, lasted 26 hours, and Hardison was only given a 50 percent chance of surviving.

But he did survive and his life has been transformed.

“People -- they can look at me and tell something’s happened, but they would never look at me and think that I’d had a face transplant,” Hardison said. “Normal has become a reality over the year. Normal was something I never thought I’d see again.”