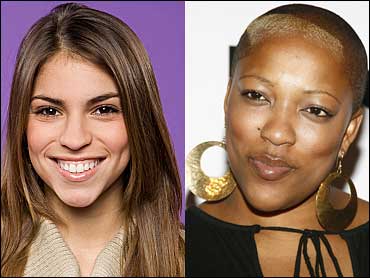 Back in 2003, buxom singer Frenchie Davis was kicked off the hit reality show when scandalous photos of her turned up.

A double standard? Davis thinks so.

"I couldn't help but notice the difference between the manner in which she was dealt with and how I was dealt with," Davis told The New York Post on Monday. "I think it's fantastic if 'Idol' has evolved, and I think it's fantastic she won't have to go through what I went through four years ago … but if the rules have changed, I believe there should be something to make up for the fact that I was humiliated needlessly."

Davis, who was just 23 years old when she was kicked off "Idol," says she was up-front about the photos.

"I had taken them five years before I was on 'Idol,'" Davis says. "It happened and I was honest about it . . . and weeks later they decided to kick me off the show … they said it was because of the photographs, but my photos certainly weren't sexual."

"It's not necessarily something I'm proud of, but not something I regret, either," David said, adding that the scandal a very painful experience for her and her parents.

"Fox and the producers of American Idol have no desire to revisit history and sully the reputation of Ms. Davis," Fox said in a statement to The Showbuzz. "She was removed from the show over 4 years ago and has gone on to a successful performing career. We have never discussed the specifics of why Ms. Davis was eliminated, nor will we now."

Davis was able to move beyond the scandal, however, and today she is a successful Broadway star, ending a four-year run in "Rent" on May 24.

The New York Post reports that Frenchie's fans are scheduled to protest in support of Davis on Tuesday at the Kodak Theatre in Hollywood, where the Fox reality show is filmed.

The fallen "Idol" star told the newspaper she would be willing to have an open discussion with producers about why things went down the way they did.

"I'm willing to come to the table. It's open for discussion," she says. "I wish no one ill. I've never bad-mouthed 'Idol' and I never will."