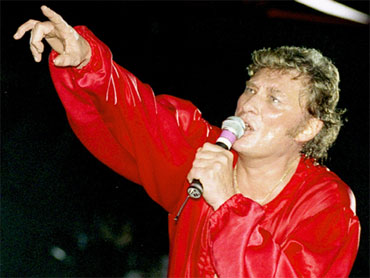 Johnny Hallyday's press relations office says the French rocker has emerged from a medically induced coma he had been in since last week.

In an e-mail, the Paris-based 96b press relations office said doctors at L.A.'s Cedars Sinai hospital woke Hallyday up on Monday.

Doctors at the hospital had induced the coma following an operation last Wednesday to fix lingering back trouble from an earlier operation in Paris on a herniated disc.

Hallyday, 66, is France's biggest rock star. He's in the midst of a multi-city tour in France, and it was not clear whether he'd be able to return to the road to finish the tour. Hallyday has had a series of health problems this year, and had a cancerous polyp removed from his colon.