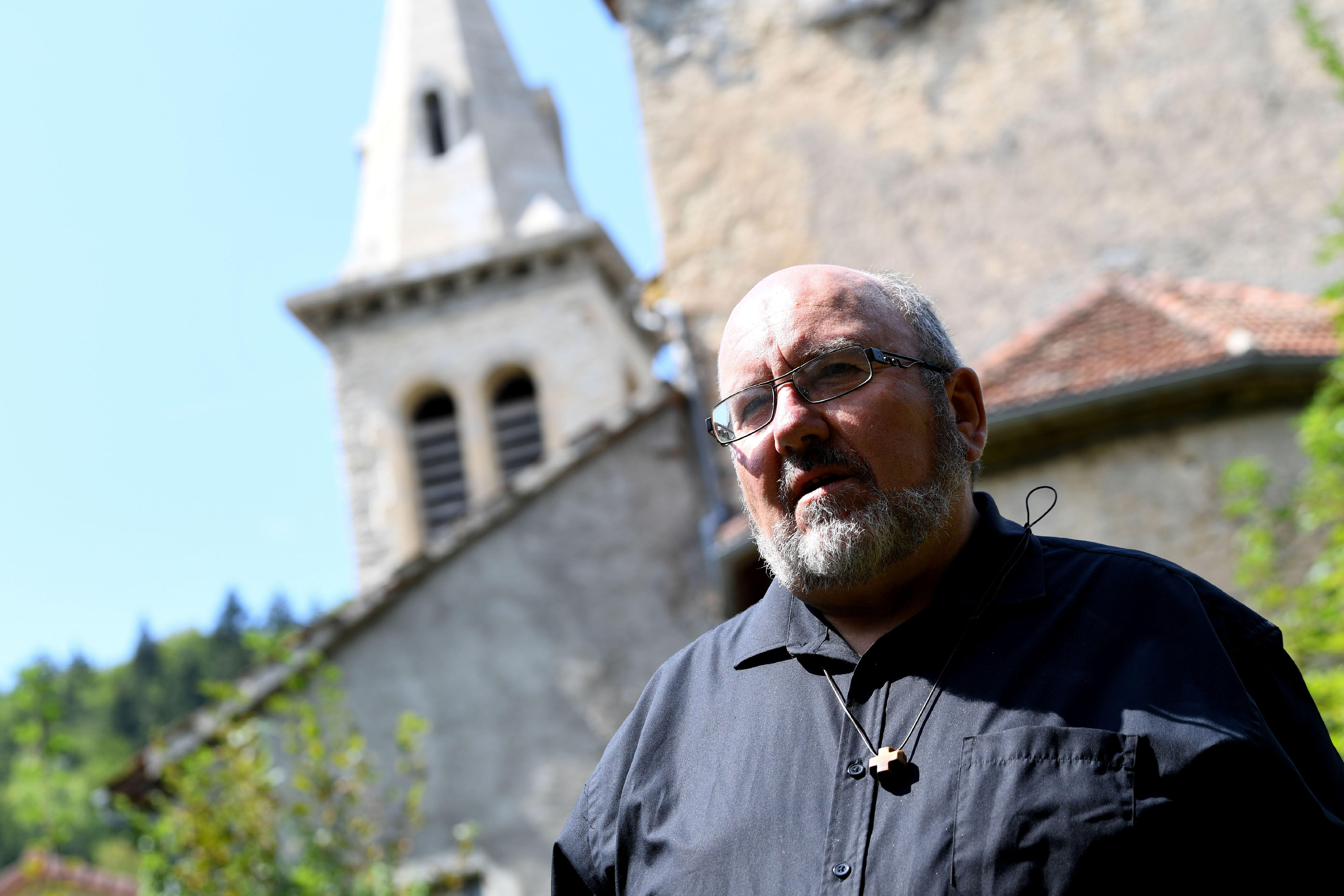 SAINT-MARTIN-EN-VERCORS, France -- When a lowly Roman Catholic father rebels against the church hierarchy, publicly castigating a prominent cardinal's handling of child sex-abuse cases, is that an act of backstabbing against the institution he serves or a brave solo effort to help save it? That is the debate provoked by the actions of a priest in France, with his remarkable step of petitioning the cardinal to resign. Judging from the sheaf of letters and cards that Rev. Pierre Vignon is clutching in his soft, plump hands, his uprising has divided churchgoers.

To hate-mailers, the previously anonymous 64-year-old propelled into the spotlight by his online petition launched two weeks ago is an attention-grabbing egomaniac who is courting disaster by taking on the influential archbishop of the southeastern city of Lyon.

But mostly, Vignon says, those writing to him are supportive. They include people who have themselves been abused by predator priests. He plucks one such "thank you" card from the pile and reads out loud.

"Because of you I want to go back to church," its author wrote. "When I do, I will think of the victims."

Vignon clearly relishes being at the center of the storm, with reporters now beating a path to the Vercors plateau in southeastern France where the portly priest ministers.

The Vercors' mountain villages and choppy terrain were centers of French resistance against Nazi occupation in World War II. Vignon says he had family members in the resistance and that the region's freedom-fighting history helped inspire his own decision to break ranks and call publicly for the resignation of Philippe Barbarin, archbishop of Lyon since 2002. Vignon faults the cardinal's handling of a notorious alleged pedophile priest suspected of abusing Lyon boy scouts in the 1980s.

"I have always been unmanageable," Vignon says proudly. "There comes a moment when one has to say 'No! No more, that's enough!' That's what I said: 'Enough.'"

On this day, Vignon is particularly buoyant because his petition on change.org has just garnered its 100,000th signature, a milestone that heaps more pressure on church leaders to choose sides. After clambering out of his hoarse-sounding Fiat Panda, Vignon whipped out his mobile phone to show how a friend texted him blow-by-blow updates: 99,980 signatures, 99,990, 99,995, and, finally, four minutes later, 100,000.

With a glint in his eye, Vignon couldn't help but gloat.

"I don't know if Cardinal Barbarin will forgive me this joke, but he has such colossal energy, which I don't have, that he is often nicknamed 'The 100,000-volt cardinal.' Now, unfortunately, he's going to become the 100,000-vote cardinal,'" Vignon said.

Barbarin and other church officials are due in court in January to answer victims' charges that they were aware of the Lyon priest's alleged history of abuse and didn't alert authorities. Barbarin has denied any attempt to cover up the case and has been supported as "brave" by Pope Francis.

Francis, too, is facing resignation calls over accusations by a former Vatican ambassador that he covered up for American ex-Cardinal Theodore McCarrick.

Further evidence that Rome's mounting cover-up scandal is going global: Several weeks ago, an Australian bishop was convicted and sentenced to a year of home detention for failing to report a pedophile to police.  And a Chilean cardinal was summoned to give testimony in a sex-abuse cover-up investigation.

Vignon says he's had no indication that Barbarin even read his open letter. In it, the priest of 38 years argued that "we are at one of those crucial hours in history where great acts are required" and asked Barbarin: "You yourself acknowledged management mistakes. Why would you remain in place indefinitely having made them?"

The petition hasn't prompted Barbarin to resign, but it has exposed fissures in the French church. Those who have spoken in support of Barbarin include Vignon's own boss, Valence bishop Pierre-Yves Michel. Michel and another French bishop wrote in church newspaper La Croix that Barbarin shouldn't resign and described attacks against him as an "ideological settling of scores."

"I have violated the unwritten law that one shouldn't make waves," Vignon says. "Because of that I've received quite a bit of criticism from some colleagues and somewhat traditional and conservative churchgoers."

But he says dealing with abuse and its aftermath must be the church's priority.

"We can't say 'God loves you' when there are such somber sordid stories that make one feel sick and uncomfortable. No. No. At this point, the abscess must be punctured, treated and healed," he says.

Vignon's supporters include a group of alleged victims of Rev. Bernard Preynat, the Lyon priest under criminal investigation on preliminary charges of sexual assaults on minors. Preynat, now in his 70s, confessed wrongdoings in letters to victims' parents and meetings with his superiors, including Barbarin. His last known abuses were in 1991.

Francois Devaux, president of the "La Parole Liberee" (Lift the Burden of Silence) group, says Vignon took a risk in going public because he would have looked "a bit stupid" had his petition garnered few signatures.

"For the first time, a cleric is asking himself the question: 'What about me? What is my stance in this?'" he said. "It is a courageous act. And that shows up the passive complicity, the passive responsibility of others."

He believes the success of Vignon's petition could be a turning point in French church attitudes to abuse. After the petition surged past 100,000 signatures, Devaux got an unsolicited call that same evening from a "very, very worried" bishop asking "what can we do?" Devaux wouldn't name the bishop.

"The church, or some people in the church, high up, are starting to realize how serious the situation is," he said.