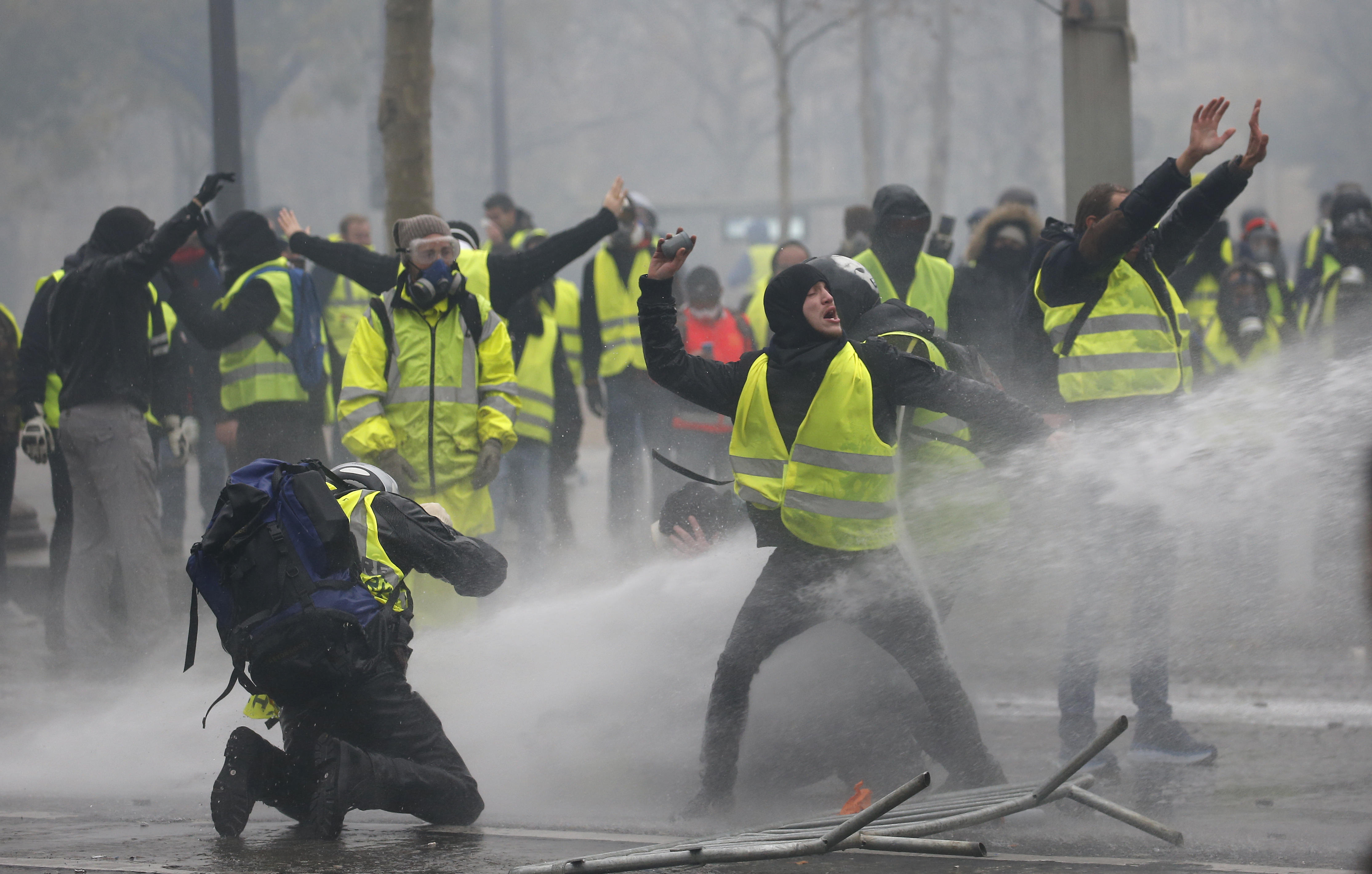 PARIS — A French protest against rising taxes and the high cost of living turned into a riot Saturday in Paris as police fired tear gas and water cannon in street battles with activists wearing the fluorescent yellow vests of a new movement.

Police said at least 90 people, including 14 police officers, were injured in violent protests in the French capital, and 205 others were arrested. Thousands of police were deployed in Paris to try to contain the protests.

It was the third straight weekend of clashes in Paris, and the scene contrasted sharply with protests Saturday in other French regions, where demonstrations and road blockades were largely peaceful.

The clashes started early Saturday near the Arc de Triomphe monument and continued in the afternoon down several streets in the French capital's most popular tourist area. Pockets of demonstrators built makeshift barricades in the middle of Paris streets, lit fires, sprayed graffiti on the Arc de Triomphe and threw rocks at officers. They also set fire to cars and trash cans.

Some demonstrators removed the barriers protecting the Tomb of the Unknown Soldier from World War I under the Arc de Triomphe monument, to pose near its eternal flame and sing the national anthem. They were then dispersed by police.

In addition to rising taxes, demonstrators are furious about President Emmanuel Macron's leadership, saying his government does not care about ordinary people. The grassroots protests began with motorists upset over a fuel tax hike, but now involve a broad range of demands related to France's high cost of living. Some of the protests appear to have been hijacked by more radical far-right or far-left groups.

French authorities said they counted 36,000 protesters across the country, including 5,500 in Paris.

Earlier Saturday, several hundreds of peaceful protesters in Paris passed through police checkpoints to reach the Champs-Elysees. They marched on the famed avenue behind a big banner writing "Macron, stop taking us for stupid people."

Access to the Champs-Elysees was closed to cars and strictly monitored by police with identity checks and bag inspections. All subway stations in and around the avenue were closed for security reasons.

"It's difficult to reach the end of the month. People work and pay a lot of taxes and we are fed up," said Rabah Mendez, a protester who came from a southern suburb to march peacefully in Paris.

"Our purchasing power is severely diminishing every day. And then: taxes, taxes and taxes," said Paris resident Hedwige Lebrun. "The state is asking us to tighten our belts, but they at the contrary live totally above all standards with our money."

Since the yellow jacket movement kicked off on Nov. 17, two people have been killed and hundreds injured in accidents stemming from the protests.