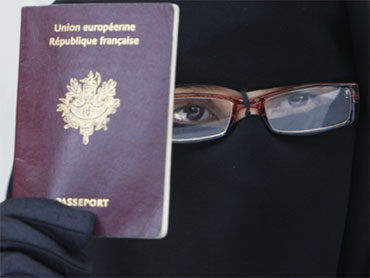 France's hotly debated bill to ban burqa-style Islamic veils in public is going before parliament, with President Nicolas Sarkozy's government casting the measure as a way to promote equality between the sexes and protect oppressed women.

The bill being debated Tuesday is widely expected to become law, despite the concerns of many French Muslims, who fear it will stigmatize them. Many law scholars also argue it would violate the constitution.

While ordinary Muslim headscarves are common in France, face-covering veils are a rarity - the Interior Ministry says only 1,900 women in France wear them.

Yet the planned law would be a turning point for Islam in a country with a Muslim population of at least 5 million people, the largest in western Europe.

France is determined to protect the country's deeply rooted secular values, and the conservative government is encouraging a moderate, state-sanctioned Islam that respects the secular state. Last week Prime Minister Francois Fillon inaugurated a mosque in the Paris suburbs.

Discussion on face-covering veils starts later Tuesday at the National Assembly, or lower house, where lawmakers are expected to vote on the bill July 13. The bill goes to the Senate in September. Some leftist opposition lawmakers also support it.

Authorities in several European countries have been debating similar bans. Belgium's lower house has enacted a ban on the face-covering veil, though it must be ratified by the upper chamber.

In France, the bill says France's founding tenets of liberty, equality and fraternity are at stake.

The legislation would forbid face-covering Muslim veils such as the niqab or burqa in all public places in France, even in the street. It calls for euro150 ($185) fines or citizenship classes for women who run afoul of the law, and in some cases both.

Part of the bill is aimed at husbands and fathers who impose such veils on female family members. Under the most current version of the text, anyone convicted of forcing a woman to wear such a veil risks a year of prison and a euro30,000 fine - with both those penalties doubled if the victim is a minor.

Amnesty International has urged French lawmakers to reject the bill, and a French anti-racism group, MRAP, which opposes such dress, has said a law would be "useless and dangerous." France's highest administrative body, the Council of State, warned in March that a total ban risks being found unconstitutional.

France banned common Muslim headscarves and other obvious religious symbols from classrooms in 2004.