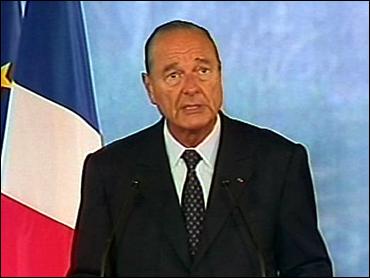 Key lawmakers from President Jacques Chirac's party have voiced growing concern over the damage France's anti-war stance is having on relations with the United States and the future of the United Nations.

Herve de Charette, a former foreign minister and lawmaker with the ruling center-right UMP party, was the latest to add his voice to a string of warnings about the consequences of an eventual French veto in the Security Council.

Saying he believes war on Iraq is inevitable, de Charette told LCI television that any veto blocking a U.S-backed resolution seeking authorization for war "is a decision that has great ramifications, of great gravity."

He noted that France, one of five permanent members of the Security Council that holds a veto, has not used one against the United States since the crisis over the Suez Canal in 1956.

The UMP's president, Alain Juppe, the party's parliamentary head, Jacques Barrot, and Edouard Balladur, the head of parliament's foreign affairs commission, have also all warned that a veto risks a complete breakdown in relations with the United States and some European countries.

France has "avoided committing a mistake, which some are pushing for, that would have left it isolated: wrongly brandishing its right of veto," Juppe told a debate on the Iraq crisis in parliament on Wednesday.

"A veto is unimaginable," Claude Goasguen, another UMP lawmaker, told the daily Le Monde in its Thursday edition. "We are not going to break the United Nations and Europe just to save a tyrant," he said, referring to Iraqi leader Saddam Hussein.

"We have taken into account the concern about not uselessly breaking relations with the United States," Barrot also told the paper. "We are not going to get to the point of getting into an argument with Western democracies."

The comments do not indicate dwindling support for Chirac's drive to give weapons inspectors more time and muscle to disarm Baghdad peacefully, and the belief everything should be tried before resorting to war.

But it does reflect mounting concern about the direction French foreign policy is taking, and where it will lead — perhaps a sign the pendulum in France may now be slowly starting to shift toward the position of the United States.

On Thursday, Prime Minister Jean-Pierre Raffarin said France has "no affection" for Saddam and his country might eventually participate in a U.S.-led military coalition, something the government has never ruled out.

"If Saddam Hussein does not respond to the calls of the inspectors, we do not exclude the use of force," Raffarin told the regional Paris-Normandie newspaper in an interview to be published Friday.

Though the remarks didn't signal a shift in official position, Raffarin's tone was noticeably tougher on the Iraqi leader. The premier said he believes the crisis can be resolved through diplomacy and that France still hopes to persuade the United States to hold off on its war plans.

"We have no affection for Saddam Hussein, but we are also mindful of the harm that can come to the Iraqi people" if a war starts, Raffarin said.

Opposition Socialist and Communist leaders stridently oppose war and have repeatedly urged the government to veto any resolution paving the way for military strikes.

A standoff has arisen at the United Nations, where a U.S.-backed resolution seeks U.N. authorization for war, while a French-Russian-German proposal seeks to continue weapons inspections at least into July. Canada has proposed a compromise measure suggesting Iraq be given until the end of March to complete a list of remaining disarmament tasks identified by U.N. weapons inspectors.