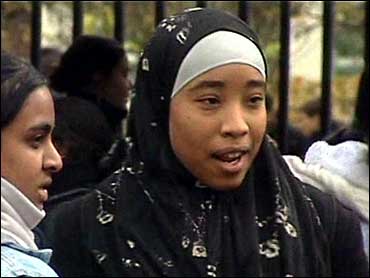 The expulsions of at least five girls since Tuesday were the first since the law went into effect at the start of the academic year on Sept. 2. They were kept low-key because the French journalists' captors had demanded the measure be abolished.

After disciplinary hearings, officials on Wednesday expelled two 17-year-olds from schools in the eastern city of Mulhouse and another girl from a school in Flers in Normandy in western France.

"They have just destroyed my life," 12-year-old Khouloud told Le Monde newspaper after she and another girl were expelled Tuesday from the Jean Mace middle school in Mulhouse.

"What they want is to see us in tight pants like all the girls," Khouloud was quoted as saying. Le Monde did not give her last name.

Another five girls could be expelled this week as the Education Ministry gave school districts the signal to start taking action against 72 students who could not be persuaded to obey the law. Most are Muslim girls, but Sikh boys refusing to remove their turbans also risk being expelled.

The kidnapping in Iraq of journalists Christian Chesnot and Christian Malbrunot, who entered their third month in captivity Wednesday, forced education authorities to tread softly. The Islamic Army of Iraq, a group that claimed to be holding the journalists and their Syrian driver, has demanded the law be abolished. The French government refused.

The cautious approach stretched a required period of dialogue with recalcitrant students to the limit. School districts began disciplinary hearings Tuesday and were to continue them throughout the week. The rest of the hearings are to be held when classes resume after a vacation period marking the Roman Catholic All Saints Day holiday ends Nov. 3.

Those expelled have the right to appeal to the head of the local school board. If they are under 16 - the legal age for leaving school - the expelled students must continue their education at a private school, by correspondence or other means, said Gilles-Jean Klein, spokesman for the Academy of Strasbourg, which oversees the school district in the eastern Alsace region.

Education Minister Francois Fillon expressed satisfaction Tuesday with progress in resolving troublesome cases - some 600 at the start of the school year. Most were resolved through dialogue.

The small Sikh community in France, estimated at 5,000-7,000, has learned that turbans can also pose a problem. Three Sikh boys with turbans at a school in Bobigny, outside Paris, have been kept out of class since Sept. 2.

In the first court case resulting from the law, Sikh leaders have asked a court to force the Louise-Michel school to convene a disciplinary hearing or let the boys into classrooms. A ruling is expected Friday.

"We are here doing nothing," Jasvir Singh, one of the three, told Associated Press Television News. "We are not at school. We have no classes. ... We are in a void without anything to do."

The law is intended to uphold France's constitutionally guaranteed principle of secularism, considered undermined by a growing number of Muslim girls wearing head scarves in classrooms.

Authorities have also said they view the law as a way to fight rising Muslim fundamentalism in France and to protect the rights of women, widely viewed here as submissive to men if they wear head scarves.