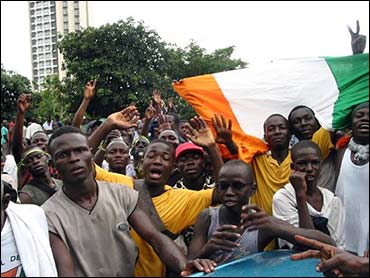 French armored vehicles took up positions near the home of Ivory Coast's president Monday, and thousands of his supporters marched on the site, fearing an attempt to oust him as France clamped down on violence in its former West African colony.

The commanders of Ivory Coast and French forces appealed on state television for the crowds to disperse.

French forces have moved to take control of Abidjan after chaos erupted in this west African nation on Saturday. Ivorian warplanes launched a surprise airstrike that killed nine French peacekeepers and an American civilian aid worker in the north, held by rebels since a 2002 civil war divided the country. The government later called the bombing a mistake.

More than 500 people have been wounded and an unknown number killed in a weekend of unrest, a Red Cross official said. State TV on Sunday showed pictures of what it said were five loyalists killed by French forces trying to quell the violence.

"Their presence here is scaring people. They're crying and they think that President Gbagbo is going to be overthrown," Tagro told The Associated Press by telephone.

The French denied surrounding the house or intending to oust Gbagbo, saying the forces were only securing a temporary base at a hotel a couple hundred yards away for foreign evacuations.

"Everything should go back to normal," Gen. Henri Poncet said. "It is absolutely not a matter of ousting President Laurent Gbagbo."

Thousands of people filled the streets around Gbagbo's home after calls on state radio and television for them to do so. French troops fired warning shots to hold back the crowd, said a worker at the Hotel Ivoire reached by telephone and speaking on condition of anonymity.

Protesters chanted against the French, yelling, "The whites don't like the blacks, but we don't care!" Some signs declares, "Ivory Coast is a sovereign state."

After 150 people were reported wounded Saturday, Red Cross official Kim Gordon-Bates said the toll had climbed to "over 500 wounded — much more than that." Loyalist mobs were blocking efforts to set up an emergency clinic for the injured, he said.

With most of Abidjan's civilians still isolated in their homes and neighborhoods, no death toll figure has emerged. Gordon-Bates did not know how many people had been killed.

France said it was not intervening to destabilize the country or take sides in the country's civil war, while Gbagbo appealed for calm.

Over the weekend, hard-liners called for loyalists to form a "human shield" around Gbagbo's home, and on Monday state media called on young and old to take to the streets nearby and at the broadcast headquarters.

Near the president's house, mobs swarmed one foreigner — by appearance an immigrant from a neighboring northern country — caught up in their midst, kicking and beating him. "Kill him," young men shouted, before he was dragged into the crowd.

Six men, faces painted black, forced an AP reporter from his taxi at gunpoint and commandeered the vehicle.

French Embassy spokesman Francois Guenon denied the French troops were targeting Gbagbo, saying, "It is not a question of ousting him, that is very clear."

French armored vehicles rolled through the city after taking control of the international airport and strategic points, including bridges, over the weekend.

After angry government loyalists looted and burned businesses and roamed house-to-house in search of French citizens, residents on Monday assessed the damage to a skyscraper-lined city that once was West Africa's most prosperous — thanks to Ivory Coast's position as the world's top cocoa producer.

"Everything is burned," said one woman, a teacher at a French school that was looted and torched in the anti-French riots. "They have stolen everything they could."

"They even tore out the toilet seat," she said, speaking on condition her name not be used. "The only thing I'm waiting for is for the airport to open, so I can get out of here."

France has about 4,000 peacekeepers in Ivory Coast. The United Nations has about 6,000, manning a buffer zone between rebel north and government south.

On Monday, French military planes returned home the bodies of the nine French forces killed in the bombing, along with 34 wounded soldiers.

In Paris, French Defense Minister Michele Alliot-Marie rejected accounts by some Ivory Coast officials that the bombing was a mistake and urged the reopening of peace talks.

A 1999 coup, amid increasing instability following the 1993 death of Ivory Coast's three-decade post-independence leader, ended Ivory Coast's reputation for stability. Gbagbo was installed amid an uprising by his supporters the next year, during an aborted vote count for the first post-coup presidential elections.

In South Africa, President Thabo Mbeki was consulting with west African leaders ahead of an emergency trip to Ivory Coast, a foreign affairs spokesman said Monday.

The African Union said Sunday it would send Mbeki to press Ivory Coast to find a political solution.