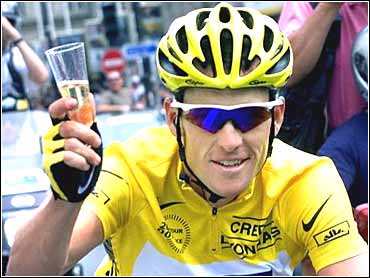 Pierre Bordry said Thursday he will hand over Armstrong's "B" samples from the 1999 Tour to Jeff Novitzky if the Food and Drug Administration agent makes an official request.

French sports daily L'Equipe reported in 2005 that Armstrong's backup "B" samples from 1999 contained EPO — a banned blood-boosting hormone. Armstrong was later cleared by an independent panel.

Novitzky and a federal prosecutor have been handling an inquiry into allegations of organized doping in professional cycling, including whether Armstrong and members of his United States Postal Service team may have been involved. Six of Armstrong's record seven Tour wins came with the team.

Speaking at a news conference about drug testing in France, Bordry said he is impressed by the work done by Novitzky and the U.S. anti-doping agency in Armstrong's case.

"They can ask us anything, we will do it," Bordry said. "We can either send them the samples or do the testing ourselves."

After Armstrong announced his comeback to competition two years ago, Bordry offered him the chance to retest his urine samples from the 1999 Tour in order to quash the doping allegations, but the American rejected the offer.

There was no reliable test for EPO in 1999, but urine samples were preserved and analyzed later when the technology was available.

Bordry said he was not allowed to order a retest of the samples because of the eight-year statute of limitations in the World Anti-Doping Agency code.

Bordry, however, said U.S. federal prosecutors wouldn't be subject to this rule as they are not working on a disciplinary case.

Armstrong has always denied he used performance-enhancing drugs during his record Tour wins from 1999-05. He capped his return to competition with a third-place finish in the 2009 race and competed in what he said was his last Tour in July.

Armstrong, who faced doping accusations since his first Tour win after beating testicular cancer, became a central figure in the federal probe after former teammate Floyd Landis admitted he had doped and alleged that Armstrong used banned drugs during his career.

Landis won the Tour in 2006 but was stripped of his title for doping.