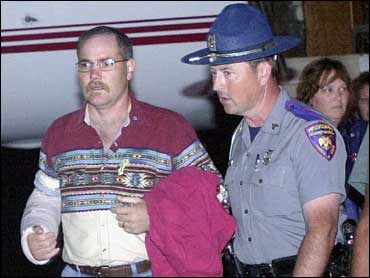 Former hostage Thomas Hamill returned to American soil after being held captive in Iraq for nearly a month, stepping off a private jet early Saturday to see a banner proclaiming "Welcome Home TOMMY" and to hear family and friends cheering and clapping wildly.

Hamill, 44, and his wife, Kellie, landed just before 1 a.m. at the Golden Triangle Airport, about 30 miles north of where they live in the town of Macon.

A state highway patrol car whisked away the couple, who waved to a group of supporters and journalists. Several people chased the car down the street.

For the most part, though, CBS News Correspondent Peter King reports Hamill's return to Macon was so low-key at his request. He wants time alone with his family, and his neighbors are respecting that request for privacy.

Hamill, whose plight captured the attention of the nation, escaped his Iraqi captors last Sunday and was treated for an arm injury at a hospital in Germany. He was wounded when his convoy was ambushed April 9.

Hamill, a truck driver working in Iraq for a U.S.-based private company, was among seven American contractors who disappeared after the April attack. The bodies of four have been found, and two are missing.

In a video, his kidnappers threatened to kill Hamill unless the United States lifted its siege of Fallujah. U.S. Marines have recently been pulling back from the city.

When he arrived at his home early Saturday morning, Hamill, wearing blue jeans and a red shirt, raised his arm in the cast to a handful of television cameras and said something that couldn't be clearly heard.

Jesse Green, a family friend, said the former hostage was "relieved" to be back in the United States.

Waiting for Hamills at their home were his 12-year-old daughter, Tori; his 14-year-old son, Thomas; and his mother, Phyllis Hamill, who lives with the family.

"He's got to have a bone graft and skin graft — that's a priority," she said.

Hamill has received letters and calls offering him movie and book deals, she said.

"I don't even think he'll consider that for a while," Phyllis Hamill said. "He says foremost is there are people still over there in the military and others that are still being held hostage and all. Next is his family, seeing his kids."

Goodwin said Thomas Hamill has made no decision about a book deal. Lynch received a book deal valued at $1 million and a network turned her story into a television movie.