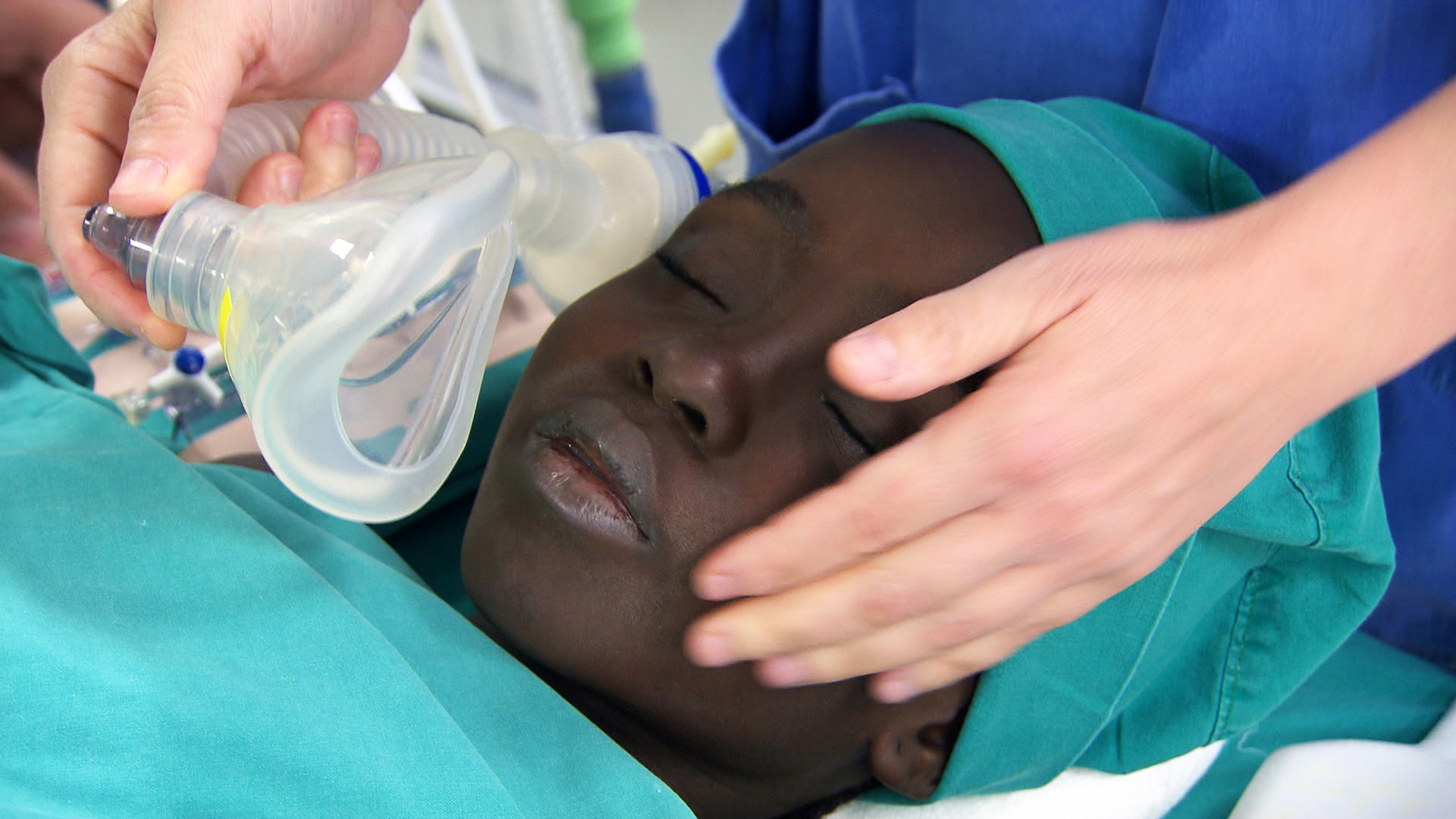 The following is a script from "EMERGENCY" which aired on May 11, 2014. Clarissa Ward is the producer. Ben Plesser, producer.

We usually think of heart disease as a condition that develops late in life. But in Africa, hundreds of thousands of children are dying every year of heart failure. Their condition is caused most frequently by strep throat.

It's called "rheumatic heart disease." An estimated 15 million African children have it and four out of five of them will die before they reach the age of 25. If you've never heard of it before, that's because it's long ago been eradicated here in the West.

For most children who have it, the only cure is open heart surgery. There is just one hospital in all of Africa which offers the expensive operation free of charge. It's run by an Italian organization called Emergency, whose founder and chief surgeon, Dr. Gino Strada, believes that doctors have to fight for every life, regardless of the cost.

Our journey began in Sierra Leone, where we met a sweet, healthy-looking girl called Mariata with a ticking time bomb in her chest.

Sierra Leone is a tiny country on Africa's west coast which holds a sad record. Its population has the lowest life expectancy in the world. On average, people here only live to the age of 47.

But when Esther's 11-year-old daughter Mariata first became sick, she couldn't imagine that her condition could be fatal.

Mariata was having a hard time walking. Her breathing was labored. Her entire body seemed to be slowly shutting down.

Esther: I decided to go with her to hospital.

Esther took her to a hospital run by Emergency, where cardiologist, Dr. Mimo Risika, examined Mariata and delivered some grave news.

[Mimo Risika: This mitral valve doesn't close. It's part of the heart.]

Dr. Risika explained that one of Mariata's heart valves was severely damaged. And that the only thing that could save her life was open heart surgery.

Esther: I asked him, "Doctor what is the cause of this problem?" He told me that it is a sore throat that causes this problem to people.

When Mariata was just four years old, she had strep throat, an infection caused by the streptococcus bacteria. Kids everywhere get it, but because Mariata lives here, she wasn't taken to the doctor and wasn't given antibiotics.

When repeated infections go untreated, they can lead to a far more serious condition: a damaged heart valve which in Africa is almost always a death sentence.

There is nothing Dr. Rizika can do for her except send her medical file to Emergency's hospital in Sudan to see if they will take on her case. It is Mariata's only hope.

In a refugee camp in Sudan, we met the man who runs that hospital.

Gino Strada: Here we are really talking about, you know, drying the ocean - with a spoon.

Dr. Gino Strada, Emergency's founder, is a heart surgeon. He first arrived here 10 years ago to treat the victims of Sudan's vicious civil war. What he found was a community ravaged by a disease.

Emergency started a clinic where staff test for the dangerous streptococcus bacteria and treat it with antibiotics. But preventative medicine wasn't going to help the children who already had the deadly heart condition.

Gino Strada: Here we are in hell because the death toll that these children pay for rheumatic heart disease is just unbearable.

So he decided to do something radical: to offer cardiac surgery, free of charge, right here in Sudan. With some funding from the Sudanese government and from Emergency's donors in the West, he built the Salaam Center, a gleaming, state of the art hospital where he presides over a surgical team that performs four to six open heart operations a day.

Gino Strada: You know, when Emergency decided to build here in Sudan, a center of cardiac surgery, we were heavily criticized, "Oh, this is crazy. This is not what the Sudanese people need." And our answer was, "Why not cardiac surgery?"

Clarissa Ward: Well, the argument would be that you're spending a lot of money saving relatively few lives where you could be spending that money saving many more lives.

Gino Strada: Absolutely. That's true. And that's why there are a lot of agencies who are entirely devoted to focus on communicable diseases and malaria and vaccinations, and all this. And this has to be done. But it cannot be the only approach.

Dr. Strada's approach is to fight for every life.

Gino Strada: This disease alone kills, in Africa, more than 300,000 people every year.

Clarissa Ward: But what percentage do you save of that?

Gino Strada: Oh, very small one, insignificant because we can do 1,500 operations per year, no more. One hospital for a continent, obviously, is not the solution of the problem. It's just a seed.

It's a seed that Dr. Strada wants to spread. Which is why he brings in patients from other countries.

Dr. Rizika's mission in Sierra Leone was to identify the most urgent cases and suggest them as candidates for surgery in Sudan.

"One hospital for a continent, obviously, is not the solution of the problem. It's just a seed."

While we were there, he was called in to see another little girl, Sufiatu.

[Mimo Risika: Sufiatu, how are you?]

Hers was an urgent case. Her body was struggling to fight off a severe infection that had formed around her damaged heart valve.

The question was not whether or not to send her to Sudan. It was whether she would survive the grueling journey.

[Mimo Risika: She must be operated as soon as possible.]

Most of the kids Dr. Risika sees here are not as far gone as Sufiatu. But without surgery to repair their hearts, none of them have long to live.

And Emergency can only afford to save a handful of them.

After two days in the hospital, Sufiatu was able to walk on her own...enough for the doctors to declare her fit to travel. She joined Mariata and three other very sick children who gathered with their mothers for the trip.

Together they set out on the 4,000-mile journey to Sudan. None of the kids - or their mothers - had ever travelled so far. Never been on a ferry, never taken a flight, never been to another country by the last leg of the trip, Sufiatu was fading and by the time they landed, she had to be rushed by ambulance to the Salaam Center.

She was taken into surgery the very next day.

Dr. Strada invited us to watch the operation.

And explained what he was doing.

Clarissa Ward: So you're preparing now to stop her heart completely?

Clarissa Ward: And her body temperature will be taken right down?

Gino Strada: Yeah, down to 30 degrees.

Clarissa Ward: And the only thing keeping her alive will be this machine here?

Clarissa Ward: Can you see already how bad the damage is?

He carefully positions the artificial valve and then stitch by stitch, secures it firmly in place.

The operator of the bypass machine begins restoring the blood flow to the heart.

Clarissa Ward: Now the heart is about to start beating for itself again?

Gino Strada: Cannula is out.

Clarissa Ward: Is that the hardest part over?

Sufiatu will spend the next few days in an intensive care unit. Even if the operation is successful she will rely on Emergency for drugs and medical care for the rest of her life. But that still beats the alternative.

Clarissa Ward: Without this surgery, how long could she have survived?

Gino Strada: Well, from one day to three months.

Clarissa Ward: But not longer than three months?

Clarissa Ward: So how many heart surgeries have you done?

Gino Strada: Well, at this center, I think we did slightly over 5,000.

Clarissa Ward: But you personally in your life?

Gino Strada: Oh, I didn't count, but I do it every day.

Gino Strada: Yeah, I'm basically a surgical animal, you know, that's the only thing I can do.

He's been doing it for decades. After medical school he trained at Stanford and Pittsburgh Universities before joining the Red Cross to become, as he calls it, a war surgeon. But he felt that he could do more. So he started Emergency, a small organization devoted to the treatment of victims of war that quickly became known for going where other groups don't.

Clarissa Ward: Emergency has a reputation for pushing the envelope, for pushing right onto the front lines. Is that necessary?

Gino Strada: Well, it is. Because that's where the most wounded are.

But to get to the frontlines, Emergency works closely with some of the world's darkest regimes including, here in Sudan, notorious President Omar al Bashir who has been indicted for war crimes.

The small organization Dr. Strada started 20 years ago now runs eight hospitals and 49 clinics in some of the world's most troubled countries and, at 65, Dr. Strada now lives at the Salaam Center full-time.

At eight o'clock every morning he sits down to discuss the day's cases. Today, the first patient under his knife will be Mariata, the first little girl we met in Sierra Leone. As Dr. Strada prepared to perform the secular magic of open heart surgery, Mariata's mother Esther led the Sierra Leone group in prayer, singing to God to steady the surgeon's hand.

[Clarissa Ward: Look at that, wow.]

The operation was a success.

"It's a disease where the young, the kids, the teenagers, pay the highest price. We are trying to do the small things that we can do. And we know it's a drop in the ocean."

Clarissa Ward: Does it feel good to see it start beating again?

Gino Strada: Yes, much better than the opposite. Believe me.

Mariata is one of the fortunate few. She won't share the fate of hundreds of thousands of children who die of this disease each year.

Clarissa Ward: How do you choose the small handful that get flown over here for this state of the art treatment?

Gino Strada: It's just a matter of coincidences.

Clarissa Ward: But in a sense, you choose who lives and who doesn't?

Gino Strada: You know, every time you say yes to someone, you are automatically say no to somebody else. We can perform 1,500 operations per year, so we can distribute 1,500 coins to the winners.

We went to the ward to see how one of those winners, Sufiatu, was doing.

She was making a remarkable recovery. And just a week after they arrived, she, Mariata and all the other kids from Sierra Leone were back on their feet. They were, quite simply, reborn in the operating room.

Gino Strada: It's a disease where the young, the kids, the teenagers, pay the highest price. We are trying to do the small things that we can do. And we know it's a drop in the ocean.

Carnegie heroes and the neuroscience behind acts of heroism
Clarissa Ward