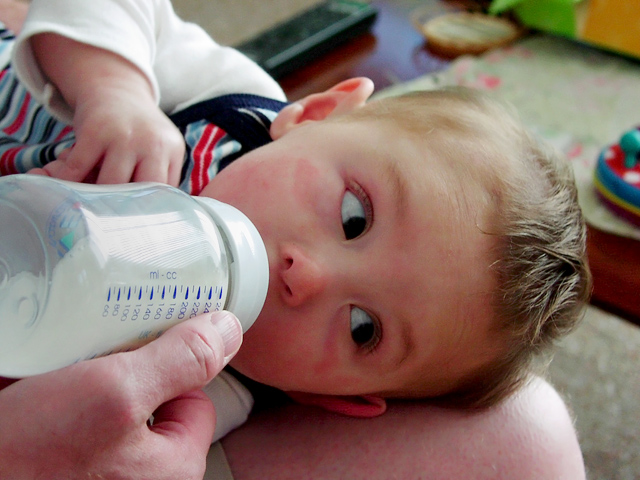 PICTURES - Breast-feeding state by state: Who's #1?

Rhode Island is the first state to end this widespread practice. State officials made the decision on Monday, saying breast-feeding has proved healthier than formula for both infants and mothers. Breast milk is rich in nutrients and antibodies that protect babies, and is easier to digest.

"As the first `bag-free' state in the nation, Rhode Island will have healthier children, healthier mothers, and a healthier population as a whole," said Stephanie Chafee, a registered nurse and the wife of Gov. Lincoln Chaffee. "This is a tremendous accomplishment." She called the decision a critical step toward increasing breast-feeding rates.

According to a 2010 report from the CDC, 33 percent of babies are breastfed exclusively for the first three months of their lives.

Formula will still be available to new mothers who experience difficulties with breast-feeding.

The new policy isn't intended to force women to nurse their children, according to Denise Laprade, a labor and delivery nurse at Woonsocket's Landmark Medical Center, which eliminated free formula distribution last month. Instead, the focus is on parental education and on helping mothers decide what's best for their children, she said.

"We never make any woman feel guilty about her decision," Laprade said. She said she has received few complaints from parents about the new policy, though she said the older nurses needed a little time to adjust.

Nationally, about 540 of the nation's 3,300 maternity hospitals have stopped giving away formula, according to Marsha Walker, a registered nurse in Massachusetts and co-chairwoman of "Ban the Bags," a campaign to eliminate formula giveaways at maternity hospitals.

"Hospitals should market health and nothing else," Walker said. "When hospitals give these out, it looks like an endorsement of a commercial product."

But the International Formula Council, a trade group representing formula manufacturers, said the bags also include "key educational materials" on how to use and store formula. "Mothers should be trusted to make good choices for their babies," the council said in a statement. "More than 80 percent of U.S. infants will be given formula at some point during their first year of life ... these educational materials are needed by the vast majority of mothers to ensure infant formula is prepared correctly and the baby's health is not jeopardized."

Crystal Gyra, a new mom from Providence, R.I., said that while the new policy is well-intended, women should have the option of taking home formula samples. She said she gladly accepted the free formula she received after giving birth to her daughter Gianna, now 2 months old.

"It helped me," she said of getting the samples. "They should leave it up to the women to decide whether they want to take the samples or not. We're smart enough to figure it out."

What do you think? Should new mothers receive free formula samples - or should hospitals stop giving bags away as a way to encourage breast-feeding?